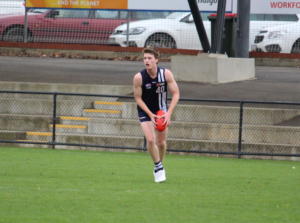 DRAFT ANALYSIS: "A consistent leader who plays the half-back role perfectly, Clark is a natural footballer who uses the ball well and just has to continue developing his athleticism and versatility."

THE Geelong Falcons’ co-captain is a consistent player who is just a natural footballer. While athleticism is an area that will have to improve for Clark, he has been a pillar in defence for the Falcons this year in what has been a challenging season for the NAB League wooden spooners. He has the traits that suit his half-back role, with his football IQ allowing Clark to read the ball in flight well, mark strongly overhead, rebound the danger and reliably kick forward to a target. Often this was rinse and repeat throughout games, with Clark stopping a number of forward attacks and just consistently being there in the back 50 to settle down his predominantly bottom-age side and relieve the tension of an under-siege defence. Clark is considered more as a late to rookie prospect because of his athleticism, and versatility compared to other players who fulfil similar roles at half-back. The time he has spent in the midfield he looked good, but it is an area to continue developing to make himself more damaging up the field.

Clark is your traditional footballer who can slot into half-back and just play a role each and every week with his ability to drop off his opponent to assist teammates, mark overhead and give it off to another teammate to keep it moving. He is one of those players that in terms of on-field traits ticks a lot of boxes, it is more just not having that elite trait that catches the eye. As already mentioned, Clark’s athleticism is not a strength with the 188cm defender recording a 3.117-second 20-metre sprint and a 8.55-second agility test, while his endurance could be improved at 20.8 on the yo-yo test at the National Draft Combine. However, compared to his numbers in the pre-season, his improvement across all areas – including an 11cm increase (running vertical jump) almost four-tenths of a second quicker in the agility test, and around 0.07 seconds quicker in the 20m sprint. We have seen in the past that athleticism is not the be-all and end-all as footy smarts can be a key ingredient to developing faster, with athleticism able to be worked on over time. The athleticism is a key reason why Clark plays within his limitations and just uses the ball well and sensibly coming off half-back. Clark just keeps it simple and that is what has seen him carve out a strong top-age year. Many players have a glaring weakness, which is where when you look at Clark on-field, it is not that he has one, he seems to do everything pretty well, it is just not with that elite aspect that can separate him from his peers. One thing that Clark did which would have opened eyes was his performance in the midfield in Round 16 of the NAB League against the Tasmania Devils where he amassed 14 clearances and six inside 50s going into the middle and gave spectators a taste of his midfield ability. While his kicking efficiency dropped off to 37.5 per cent for that game – where he is normally in the 70s – his contested possession rate skyrocketed up to 76 per cent as he won 16 of his 21 possessions at the coalface.

It was this out of the box game that would have allowed draft watchers to think there was another role for Clark going forward, and at 188cm, he has the body to do it. He spent more midfield minutes in the Wildcard Round against Sandringham Dragons, but that was predominantly off a wing. It would have been nice to see Clark spend more time in the midfield given his Round 16 effort, but at least it showed he is capable of developing in that area going forward. It also would allow him to play to his strengths of footy smarts rather than athleticism if he was to win the ball in tight. But as his role throughout the year showed, Clark is a natural half-back who reads the ball well in flight and is able to rebound with ease each and every week. His leadership throughout the year – particularly on-field with co-captain Cooper Stephens out for the season – was superb, and Clark is a player who will really strive to get the most out of himself going forward. If he can build his athleticism and gain more midfield minutes in the future, perhaps developing that onball craft, then he could be a player who finds that elite trait that can do damage to the opposition. For now, Clark is considered a late-to-rookie prospect who still has a number of areas to build upon going forward, but for a club looking for a leader who ticks most boxes with consistency, then Clark could be that player that plugs a hole in the back 50.