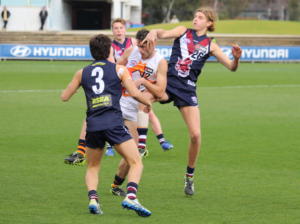 A strong marking key position utility who can also rotate through the ruck, Castan has had an up-and-down season for the Dragons this year. He still has to build his strength to compete against stronger rucks, as well as work on his skills, but when he flies for the ball he can pull down strong contested marks. He is also a nice mover for his size, particularly with his agility. His size and versatility, as well as his ability to move well through traffic is what clubs look at, and while he does have those areas to develop and be more consistent, he is a long-term prospect if selected which clubs will know to be patient.

DRAFT CENTRAL’S INTERVIEW WITH JESSE CASTAN AT THE 2019 ROOKIE ME DRAFT COMBINE: