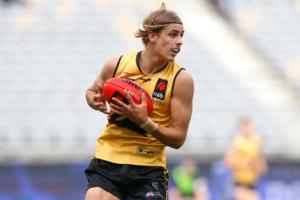 DRAFT ANALYSIS: “Sharp is one of the better outside midfielders in this year’s AFL Draft pool, often using his skills and athleticism to break the lines.”

ONE of just three players to earn dual Under-18 All-Australian jumpers in the past two seasons, Sharp is an outside midfielder with plenty of upside. His decision making with ball-in-hand combined with his penetrating kick, make him a damaging midfielder/half-back flanker with similar football and athletic traits to Collingwood’s Jack Crisp. He is also athletically sound with good speed and good endurance, with the versatility to play around the ground, having even spent time in the forward half of the ground for his state. When he improves his inside game and can iron out his kicking consistency to best utilise his long-range kicking, he has the potential to become an even more damaging midfielder at the higher level.

There were high expectations on Sharp for 2019 after he starred as a bottom-ager last year, and he handled it with aplomb. In six games for East Fremantle’s League team, he averaged 16 possessions, five marks, three inside 50s, two tackles and booted three goals, with his best performance coming against Peel in round 15 (20 possessions, six marks, five inside 50s, three tackles and a goal). Even when playing against the bigger-bodies, Sharp showed a willingness to take the game on whether it be through his speed or his penetrating kicking skills. At the senior level he also showed he could adapt to different roles, playing as a half-back flanker as well as a wingman. Certainly looking at Sharp from a raw canvas view, he has the athletic traits as well as the raw footballing traits to have an impact at senior level sooner, rather than later.

He was also solid for Western Australia at this year’s AFL Under-18 National Championships, where he averaged 21 possessions, six marks and booted three goals across four games, which saw him earn All-Australian selection. His best performances for the Sandgropers came against Vic Metro (21 possessions and three marks), and Vic Country (20 possessions, 11 marks and a goal). At the National Combine, Sharp produced some outstanding results in the yo-yo test (level 21.3), the 20m sprint (2.97 seconds), and the 2km time trial (6:12 minutes), showing off his athletic capabilities that he produces on the field.

However, if Sharp is to reach his true ceiling he must get better with his contested side of the game and iron out the inconsistencies by foot. At this year’s AFL Under-18 National Championships, he only averaged five contested possessions and two clearances, which could have recruiters questioning his inside midfield capabilities. Despite this, once he is in an AFL system, it is more than likely he will improve this aspect of his game. Sharp’s inconsistencies by foot see him being able to hit targets from 50m away, but also producing a number of clangers or turnovers – which can sometimes occur from opposition pressure worrying him out of it. Once he can begin to reduce that amount of turnovers, and fully utilise his deep range kicking, he will be an incredibly dangerous player. Finally the other aspect of Sharp’s game that needs improving is his ability to take intercept marks when he’s stationed in defence. If he is able to add this string to his bow, Sharp’s potential as a medium-sized defender will rise, as he will be able to help his team regain possession to help wrestle back momentum. Overall, Sharp has plenty to work with and is a player that will no doubt catch the eye once he gets up and going.