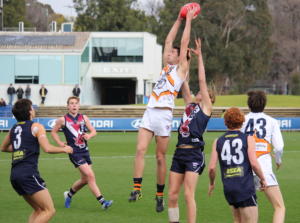 AFTER a slow start to the season, the Calder Cannons forward built form in the lead-up to finals, showing he can also push up into the midfield and play as a tall winger. He provided a strong marking target around the ground with good running ability and his work through traffic given his size was also eye-catching. Another Cannon who is an in-between size, O’Sullivan’s best position is as a lead-up half forward, and he had great success there because he was such a difficult size to match up on – too strong for small defenders and too athletic for the talls. He would perhaps be a third tall at AFL level, able to hit up and hit the scoreboard from a dozen possessions, but if O’Sullivan can refine his skills or add size, a more permanent move up the ground or as a key position player would not be out of the question. He is not yet the complete package, but has raw, draftable qualities.