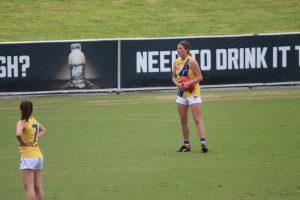 Jemima Woods has been an exciting prospect for the Western Jets, having come through the V/Line Cup program for the Western Bulldogs NGA, rising through the NAB League Girls and eventually donning the Bulldogs jumper at VFL Women’s level. Whilst still developing areas of her game, Woods has raw talent to build on for the next level.

In terms of her overall draft profile, Jemima Woods is an exciting tall forward who can also play up the ground if required. She is athletic, has good hands and knows where to lead. Her work inside 50 is solid, and she showed it entering the VFL Women’s system and kicking three goals on debut, albeit against the last placed Darebin. Regardless, her work rate in that game was indicative of what she has shown throughout her junior career, and whilst she does not win a lot of the ball, she can certainly have an impact with it going forward.

In the NAB League Girls, Woods kicked four goals in eight games, but it was more her work up the ground – averaging more than three inside 50s – that caught the eye, and avearging two marks per game. She pinch-hit in the ruck to average around five hitouts per match, and laid more than a couple of tackles per game as well. Standing at 174cm, Woods has shown she can be that second ruck given her athleticism, though playing as a high half-forward she can do the most damage

In terms of improvements, Woods can still build on all the areas of her game, but it is more her consistency from week-to-week which is the key. Her development over the past fgew years has ben noticeable, and at her size and mobility, Woods looms as a player that clubs could take a chance on for the long-term given her upside.

“The talented tall forward has come on in leaps and bounds this season, developing her game to play further up the ground in season 2021, and even pinch-hitting in the ruck. At 174cm she is able to compete well one-on-one with a high work rate and clever leading patterns to find the ball inside 50 thanks to her athleticism. More often than not though, Woods has found herself being the first target in the forward half, then looking for options inside 50, with more than three inside 50s per game to go with her four goals from eight matches. Averaging almost 12 touches per game at NAB League Girls level, Woods burst onto the VFLW scene with three goals on debut for the Western Bulldogs, and whilst the going has been tougher since, still has some great upside for the future.” – Peter Williams via “2021 AFLW Draft Positional Analysis: Tall/Medium Forwards”

“A raw forward talent who showed in glimpses what she is capable of this year, Woods plays her best football as that high half-forward leading out, then kicking back inside 50. She averaged more than three inside 50s a game, pinch-hit in the ruck and was able to provide a leading target for the Western Jets in 2021. She kicked the four goals in eight games, but it was mostly her work up and down the ground that caught the eye, knowing when to move and provide a target. At VFL Women’s level, Woods played closer to the big sticks, slotting three majors on debut against Darebin Falcons, and has featured in two matches since. Whilst her numbers are lower, her role has also been changed, and she is capable of playing high or low inside forward 50.” – Peter Williams via “Ones to Watch: Non-AFLWU19s VFLW Performers”

“Woods is a wonderfully dynamic footballer with eye-catching athleticism and clean hands, traits which allowed her to fluently mix time between the forwardline and midfield. She finished second in Western’s goalkicking count with four majors, and averaged a tick over 12 touches per game as an impactful player forward of centre. Along with Sargent and Asciak, Woods is another who benefitted from gaining VFLW experience.” – Michael Alvaro via “2021 NAB League Girls team review: Western Jets”