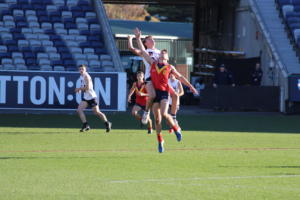 A fierce inside midfielder who loves the contested side of football, McEntee laid a massive 6.5 tackles per game in season 2019 playing for Sturt in the SANFL Reserves. McEntee showed off his elite agility at the state combine with a time of 7.910 seconds, as well as 2.960 seconds in the 20m sprint. Still a smaller player, McEntee is all heart and is not afraid of clashing with bigger bodies, basing his game on that of courageous Melbourne midfielder Jack Viney. He was a constant in South Australia’s Under-18 side this year and is a Sturt Under-16 best and fairest – highlighting his junior credentials. As many inside midfielders find, McEntee can work on sharpening up his disposal and expanding his game to have a greater impact going forward to become a better-rounded midfielder.