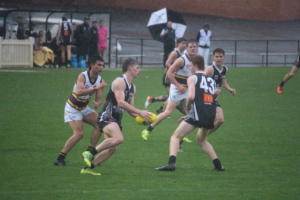 DRAFT ANALYSIS: "An elite gut-runner, Rantall racks up the ball and does it defensively as well, as the raw talent will look to build on his technical skill going forward."

A JUNIOR Australian basketballer, Rantall did not take long to become accustomed to the speed and style of Australian rules football in the NAB League. Possessing an elite tank that very few have, Rantall went about his business with minimal fuss, but more eyes on him as the season progressed. It only took until Round 3 in the final passage of play against Murray Bushrangers at Queen Elizabeth Oval (QEO) when Rantall read the tap, burst out of the stoppage and put the ball lace-out to a teammate leading out. It was one of the plays of the year and opened plenty of eyes about what he was capable of. He is still quite raw and makes mistakes, particularly when it comes to his kicking consistency, but it has been an area he has steadily worked on, and with his athletic traits, Rantall is likely to go somewhere in that second or third round as a readymade prospect physically, and just building on his technical side to play senior football.

Rantall is an exciting talent who you can rely on to run all day, win the ball and apply plenty of defensive pressure. He recorded a 22.1 yo-yo test at the NAB League Fitness Testing Day, which to put into perspective is Sam Walsh and Bailey Smith territory – and is one of the fittest players going around. On the same day he recorded a 3.12 20-metre sprint, but he is much quicker on the burst than that might have suggested, and he is a slippery customer who can get free of opponents. In terms of his ball-winning abilities, Rantall racked up 30 or more disposals in four of his games, and 20 or more in all but three of his NAB League outings. When he was not racking them up, he was nailing opponents in tackles, recording five or more tackles in all bar three of his games. In the last month of the year from Round 15 until the Wildcard Round loss, Rantall laid 45 tackles at an average of 11 per game. In the pouring rain at QEO in the Rebels’ second meeting with the Bushrangers late in the year, the medium midfielder laid a mind-boggling 18 tackles. To make sure he could also have an impact in the forward half, Rantall was often sent inside 50 to create headaches, booting 11 goals from his 12 games, including multiple goals on four occasions.

Rantall’s rise into draft calculations was swift, with the talented mover earning a spot in Vic Country’s line-up for the Under-18 Championships. Unlike what he had done at the Rebels, Rantall spent more time on the outside, winning just 32 per cent of his touches in tight compared to 46 per cent in the NAB League. He did show he can play either role and averaged the 18.8 disposals, 3.0 marks and 3.3 tackles at the championships. With his inside role at the Rebels, Rantall had more of a tackling presence, but also more of a clearance role, extracting the ball almost six times per game which is remarkable for a player not in the elite football pathway before this year. His ceiling is ridiculously high because an AFL club just needs to harness his talent and work on his technical ability around the ground. His kicking definitely improved from early in the season when he was making some bad errors by foot. He began predominantly handballing it for a while, but then gradually got it back to a more even keel, with 43 per cent of his disposals coming off his boot. In 2020, Rantall will be looked at as a player who will have no problems keeping up with the modern game, but just adjusting some of his technical skills and building on the foundations set by the Rebels this year as he could end up a very good player out of this draft.