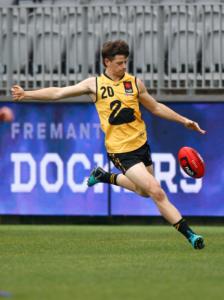 DRAFT ANALYSIS: "A talented half-back with good size and rebounding ability, Prior has to improve his physicality and defensive pressure in the next phase of his career."

JAXON Prior is a mobile half-back from West Perth. The 18 year-old from the Sorrento-Duncraig junior football club is the son of former Essendon and West Coast defender Michael who is currently a assistant coach at the Dockers. Prior was a member of the WA state U/18 squad and got some priceless league action at the tail end of the 2019 season. The youngster topped off a fine individual season when he was among five Falcons named in the WAFL Colts team of the year.

While the midfield remains where the heat of the action is, AFL teams love having their best ball users placed behind the action. Players such as Shannon Hurn, Daniel Rich and Luke Hodge have made an art form of it throughout their career. Prior would no doubt love to have something approaching the success of that trio, and he has made some positive strides towards making the AFL grade. No doubt he will get some tips from his father who was a diligent half-back flanker in his 90 AFL games for the Bombers and Eagles. Prior was a very solid contributor in the U/18s carnival averaging 16 disposals, four marks and four rebounds with his best performance coming against the Allies where he picked 18 disposals and six rebounds. Back at the WAFL level he had some monster games either side of the carnival. In round three he was the best player on the ground when he amassed 34 disposals, eight marks and three tackles against Claremont. A week later he tallied 28 disposals, four marks, four inside 50s and kicking two goals. His fine body of work continued in round five with 23 disposals, nine marks and six tackles along with four inside 50s. In Round 15, Prior had another best on ground performance with 32 disposals, four tackles and four inside 50s. It led to a well earned league debut and in two games he averaged 19 disposals and six marks. His performances during 2019 earned Prior a spot at the National Draft Combine and he produced some impressive results, not least in the running vertical jump where he came equal seventh in testing with 85cm. Along with his vertical leap, Prior also was impressive in both the 20m sprint (3.009 seconds) and agility test (8.333 seconds)

While he has plenty of impressive traits, there is still much to develop and thus Prior is considered more of a later draft selection. His physicality and contested work is something that can certainly improve, with Prior building more size this year up to 82kg, but can still further improve on that, as well as show more physicality around the ball. This improvement lends itself to another area of improvement which is his defensive pressure – averaging just over a tackle per game at the Under-18 Championships and laying just one tackle against senior bodies in two League matches. He was better against his peers, but could still lift his overall influence, with his offensive drive already impressive, he could build that defensive aspect to match. The 18 year-old is a impressive size at 189cm and will probably fill out further in the years ahead. With his athleticism, and being a good ball user, Prior could comfortably spend some minutes in the midfield as, but at this time half-back is a position where he will continue to flourish.