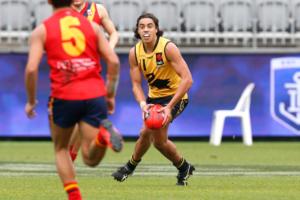 JARVIS Pina is a small defender has been an important leader for Peel Thunder and the West Australian Under 18s side, adding that extra string to his bow, as well as being able to use his penetrating skills, strong decision making and vision to create off half-back. He is a predominantly outside user who needs to build his contested game and size, but was considered for the mid-season draft. Six months on from that, Pina has showed that he deserves to be selected in this year’s AFL Draft because of not only his on-field abilities but his off-field ones as well. A natural leader who was able to play four games with the League side, Pina has been able to compete against senior bodies and therefore would not be overawed at AFL level. His skills and penetrating kick are a feature of his game which catches the eye, and there is little doubt if given an opportunity, Pina would grab it with both hands.