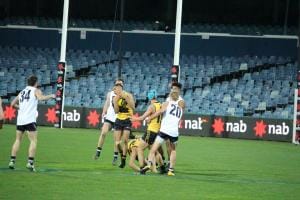 DRAFT ANALYSIS: "A clever and creative small forward who has pace and is dynamic around the goals."

Footy talent runs in the Cameron family as Jarrod is the younger brother of Charlie (now at Brisbane, formerly of Adelaide). Jarrod has a keen eye for the goals similar to his older sibling, and when he is on his game, the live wire small forward makes life extremely difficult for defenders with his closing speed and excellent pressure skills.

After the carnival, Cameron returned to his WAFL club Swan Districts where he stepped up to the Reserves and also made an appearance in the Seniors before the home and away season had concluded. The 18 year-old was able to get some invaluable big game experience in September as the Colts made it all the way to the Grand Final where they were defeated by Subiaco in a thrilling contest by two points.

Cameron is part of the West Coast Eagles Next Generation Academy meaning the 2018 premiers have first draft rights on the youngster. It remains to be seen if another team places a bid on Cameron, but if that did eventuate, you would think the Eagles would match, such is the raw talent that he possesses.

Even though Cameron is not a high possession getter, he has the ability to be impactful for his team in other ways than just kick goals. In the last five games of his season, Cameron averaged five tackles a game and produced many more pressure acts to win back possession for his team. He showed that he was not afraid of the step up in quality when he played four games for the reserves averaging 14 disposals, five tackles and four marks. For someone who is lightly framed, Cameron is certainly not afraid to put his body on the line and take some bumps and bruises for the cause of his team as he displayed in the Colts grand final. Despite coming off on more than one occasion during the game, the exciting prospect still managed to have an impact by kicking two goals.

While Cameron cops a fair bit of physical attention, he is just as capable of dishing it out. One thing an opposition player will testify is that you certainly feel the effects from a tackle by the youngster. He also has an attribute that is very hard to teach and that is steadying himself before kicking at goal when on the run . That level of poise will come in handy in the senior ranks. Cameron certainly does not lack any confidence in his ability and does not mind a conversation with the opposition. While that can work both ways, if the small forward can back it up with his performances then there should be no issue.

It is a fact that being a small forward is one of the hardest and most specialised positions on the ground to play. So often those types of players can go missing for large periods and therefore you need a sense of guile and craft to master the position. As someone who is at the beginning of their senior career, it will take Cameron a year or two to learn the ropes and work into his role.

There is no doubting the courage of Cameron and you certainly do not want to take away his natural instinct in attacking the contest, but as he has a very wiry frame there is also his longevity to consider. It will be worth adding some extra kilos to his frame for protection, but there needs to be a balance so his key attributes are not taken away.

Cameron is one of those excitement machines that you would want to have in your team. While his testing during the AFL combine was solid rather than anything spectacular, it is his impact during games which is the most important factor. The Eagles had a very reliable group of small forwards this season but with Mark LeCras coming to the end of a very good career, an opportunity in the 22 will become available.

A small forward trio of Liam Ryan, Willie Rioli and Cameron will certainly cause plenty of headaches for opposition defences. Draft night is increasingly throwing up its share of curveballs and it will be fascinating to see if another team can force the Eagles to take the talented small forward earlier than they had planned to.