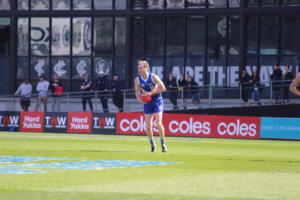 AFTER an unfortunate run with injuries over the past 18 months, Rossiter managed to put together his most consistent season yet, starting in the midfield but eventually slotting into his forward role as that third tall. Highly touted in his under-age years, he put together games towards the end of the season which pointed towards his great potential as a dynamic and versatile forward – only failing to find the goals twice in his last seven NAB League outings. A season-best four-goal haul against Sandringham in the qualifying final was a high point for Rossiter, but he has to find that form more consistently if he can keep on the park. At 190cm and 86kg, he he is readymade, but just lacks the speed, endurance and accumulation factor to be a permanent midfielder at the next level. But he is good one-on-one and strong overhead, providing a strong target inside 50 and a high work rate to develop his two-pronged threat – in the air and at ground level. At AFL level, Rossiter could well maintain that role as a third tall, with room to grow into a more key position type.