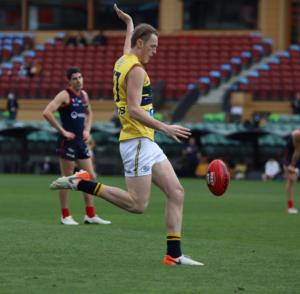 A PROMISING tall forward who also pinch-hits in the ruck, Jamie Coff consistently troubled the scorers across multiple SANFL levels this year. Four goals in Round 1 for the Under-18s saw him earn a Reserves berth, and he took his chance well with three goals in each of his first two outings. Coff spent the middle part of the season back at junior level where he booted multiple goals in each game – including seven in Round 7 – and surged back into the Reserves side to play a part in the Eagles’ strong finals effort. With good mobility and versatility to his game, Coff is one who was able to show his worth on the national stage after being named in the South Australian Under-18 squad of 36 and playing one match. With 40 goals in 19 games this year suggests he can make a big impact and take games into his own hands. Coff did not waste his time at the State Draft Combine, recording a very impressive three-second flat 20m sprint, as well as a 8.310 agility test. He does need to improve his strength and endurance however, recording just 18.3 on the yo-yo test. A long-term prospect.