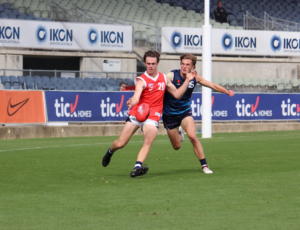 A consistent defender who was named in Vic Country’s Under-18 Championships squad but did not see a game in the end, Schischka capped off a 16-game season with the Pioneers, taking out their best and fairest award after averaging 18 disposals, 4.9 marks and 2.2 rebounds in defence. Not a huge ball winner, Schischka is just solid across a lot of areas. The best and fairest winner’s self-proclaimed improvements are physicality and his speed – 3.16 seconds on the 20m sprint at the Rookie Me Draft Combine. At 192cm, Schischka is that in-between height of a medium and a key position player but he has the skills and footy IQ to be able to play as a third tall if need be. The speed and physicality improvements are ones that have to be made to play the role at a high level, but as he showed this year, the defender is able to put a consistent performance out on the park week-in, week-out.

DRAFT CENTRAL’S INTERVIEW WITH JAMES SCHISCHKA AT THE 2019 ROOKIE ME DRAFT COMBINE: