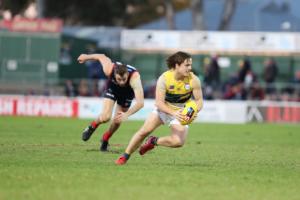 THE diminutive small forward booted 35 goals from 17 games, averaging 2.1 per game in a consistent season for the Eagles’ League side. At 173cm and 71kg, size will be a question mark for Rowe, but he averaged 12.9 disposals (6.4 contested) at 65.3 per cent efficiency. He still needs to improve his defensive pressure but has AFL links with his father Stephen playing 29 games for Adelaide. The advantage for Rowe being smaller is the fact he has no trouble turning on a dime and evading opponents. He has the smarts to win the ball and get out of tough situations, and provide support inside 50. This year, Rowe became a regular goal kicker, having previously gone through the Under 18s pathway, representing South Australia at the Under-18 Championships back in 2017, where he averaged 19 disposals, two marks and two tackles.