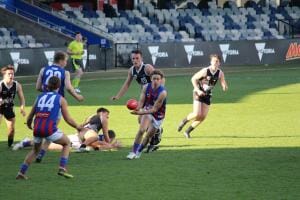 DRAFT ANALYSIS: “A contested beast, Rowbottom thrives in the engine room where he tackles hard and wins a ton of clearances.”

James Rowbottom is one of the top inside midfielders of his draft year, excelling in all areas expected of a player in his position. Mixing TAC Cup appearances with school footy duties at St. Kevins, the Oakleigh Charger has enjoyed a consistent year and turned in solid performances in all four of Vic Metro’s National Championship games. Like many inside midfielders, Rowbottom’s strengths stand out heavily and his brute force in the clinches ensures he catches the eye regularly. Rowbottom is a relentless tackler and his will in the contest to pry the ball free, keep rolling forward and find a way to get boot to ball allows his team to always be on the front foot. While his assets are exceptional, Rowbottom has a way to go to becoming a complete midfielder, with touch more polish to be applied to his game. It is clear though that Rowbottom is a ready-made prospect who can have an immediate impact if given the chance amongst more mature bodies given his aptitude in contested situations.

There are few who have been able to match the clearance nous of Rowbottom at TAC Cup level this year, with the Charger holding the second-best average (6.3) behind top five prospect Bailey Smith. With a strong core and desire to win the ball, Rowbottom hits the ball at pace and always look to push it forward by either breaking through the clinches or willing the ball onto his boot. Rowbottom’s desire to force the ball forward is also highlighted by his impressive inside 50 numbers, averaging almost five per game as he wins key balls in important areas. He moves it forward in varying ways and while he is not the quickest overall, his first three to four steps are good enough to get him free, with his decent agility granting him enough space to dispose quickly.

Another handy trait Rowbottom has is his ability to stand up in tackles and keep his arms up to flick out handballs. It is a nice touch of composure that some inside midfielders lack, but is so valuable as it keeps the play alive. The other side of an inside midfielder’s duties is the defensive one, and Rowbottom thrives on putting the clamps on his opponent. Playing so often at the coalface means that Rowbottom is constantly near the ball, allowing him to pressure the ball-carrier when he has not won it himself. He has a good knack of snatching the ball off his opponent with pure strength, but tackles hard when he can’t do so. His thirst for the contest sees him lay some bone-crunching tackles, setting the tone for his side from the supply.

Rowbottom’s improvements are products of his style of play, but branching out to develop those areas would make him a more complete midfielder. His kicking efficiency of 52.1 per cent is low, but given the weight of his contested ball numbers, clearances, and the fact that he kicks more than he handballs, it is not as bad as it seems. Rowbottom is prone to a clanger though with 16.2 per cent of his kicks resulting in direct turnovers, but again, it is about how and where he is disposing of the ball.

Inside midfielders do not often hit the scoreboard too heavily and Rowbottom is no different as he is more often the player pumping the ball into the forward 50. To add goals to his game after managing just one in the TAC Cup would be massive, and he has the capacity to do so given he is so good at winning the ball at stoppages. Rowbottom is powerful in bursts, but doesn’t necessarily have the ability just yet to extend his impact to the outside consistently. His endurance is something that can easily be worked on, and it will allow him to combine his inside ball winning with some receptions on the outside, which will only help his input in pushing the ball forward.

James Rowbottom is one of the prime ball-winners in this year’s draft crop, taking on one of the most significant inside workloads amongst the best midfielders. His tackling and work rate in-close allows him to win a heap of his own ball, earning clearances and giving his forwards quick supply from the middle. While his strengths are clear and at a very good level, Rowbottom can still improve on some key areas that will help him to stand out even more, make his impact more pronounced and raise his ceiling. At this stage, Rowbottom sits among the hard-to-read pack after the pick 30 range, but looks to be a ready-made player who can make the step up and compete with more mature bodies.