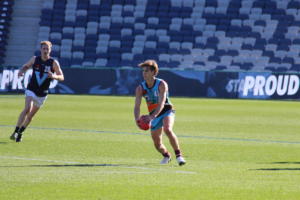 THE overager did enough during the Under-18 Championships to earn another State Draft Combine invitation, and while he has some areas to work on, he has no problem finding the ball and playing in multiple roles across the ground. The GIANTS Academy player’s best attributes are his speed and agility, while having a good football IQ. He has to build a greater tank, and is keen to improve his kicking further. It was most impressive in the Academy Series that Peatling was able to win more than half of his possessions in a contest, showing he can play inside or out, and while he does just weigh the 73kg, has the footy IQ to outsmart stronger inside midfielders. With a 3.04-second 20m sprint and 8.28-second agility test, Peatling is a smooth mover who knows how to get out of sticky situations whether it be in the contest or going forward.