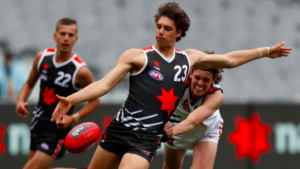 Adelaide Next Generation Academy (NGA) prospect, James Borlase produced a strong season with Sturt across all three tiers of SANFL football, and also shone in defence for Prince Alfred College. Borlase is the son of Port Adelaide Magpies legend Darryl, who played 246 games at Alberton. However, having been born in Egypt, the 192cm prospect is instead aligned to the Crows under the AFL Academy rules. Borlase started the season in the Reserves and was a consistent contributor down back for the Double Blues. He was rewarded with a League debut later in the season and hardly looked out of place at the level, averaging 11 disposals, 4.3 marks and 2.3 rebound 50s in three matches. Borlase was arguably Sturt’s best player in its Under 18 Grand Final loss to Norwood, finishing with 22 disposals and eight marks (including three contested) and looking a class above at times.

Most junior football watchers viewed Borlase as a possible draftee entering the season. However, his stocks rose steadily throughout the year and his major traits began to emerge. Although Borlase is a few centimetres below the traditional key position height, his vice-like hands overhead, strength, and competitiveness in the air ensure he is rarely out-marked one-on-one. Borlase possesses broad shoulders and a strong frame and will likely prove a difficult match-up for opposition forwards at the next level.

Although he was a consistent performer at Reserves level with the Double Blues, it was his best-on-ground showing in Prince Alfred’s All Schools Knockout Grand Final victory which really caught the eye. Deployed in his customary key defensive position, Borlase was an intercept-marking machine, cutting-off one Henley High forward entry after another. He proved too big and too strong for the Henley forwards on the day, simply reading the play better than anyone else.

Although the majority of his best work has been done as a defender so far in his young career, Borlase has also shown glimpses of his talent up forward. With a strong set of hands and the ability to read the flight of the ball in the air, he is capable of hauling in a big pack mark or bringing it to ground for the small forwards if necessary. Borlase was often trusted with the kick-in duties with Sturt in the Reserves – a testament to his improving skillset. He uses the ball well and has shown some nice composure for a big man.

Borlase does lack a bit of speed off the mark (3.287 seconds in the 20m sprint at the National Combine), however this is not completely uncommon for a player of his build and will likely improve once he joins a professional environment. There have been times where this lack of speed has gotten him in trouble, such as the Under 17 All-Stars match, where he was caught holding-the-ball twice. He isn’t a particularly athletic type across the ground, but he makes up for this with his aggression in the air and contested marking ability.

Adelaide will have priority access to Borlase, who could realistically receive a bid anywhere from the third round onwards. Borlase has progressed well throughout the season, plying his trade across a number of levels and showing some steady improvement since the beginning of the year.

Recruiters might have a few question marks over his somewhat awkward size, however he has proven he can match-up against both taller and smaller opponents, highlighting his defensive versatility. The Sturt product’s speed and athleticism are certainly areas where some improvement will be required, however Borlase’s contested marking and ability to read the play are among the best in the 2020 draft pool.

AFL clubs who are seeking a strongly-built utility should consider placing a bid on Borlase. With continued development in a professional environment, Borlase has the tools to become a strong defensive pillar who can take on a variety of opponents.