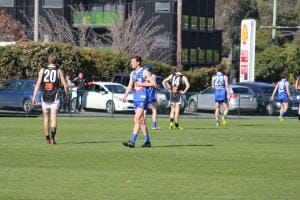 DRAFT ANALYSIS: “A remarkable story of a local league defender who has bolted into draft contention on the back of some terrific performances this year.”

Every year there is a feel-good story about the draft, and while this draft crop has plenty, Eastern Ranges’ James Blanck would be right up there in terms of rocketing from an unknown quantity to a potential draftee in 2018. Hailing from Park Orchards and playing local football last year, Blanck was plucked by the Ranges as a raw, yet talented key defender who would make an immediate impact to the team. In a season which was ultimately tough for the Ranges, winning just the two games, Blanck stood tall in defence and was aptly rewarded with Vic Metro selection and a National Draft Combine invitation. Among his strengths, Blanck is lightning quick off the first few steps, is one of the cleanest spoilers in the draft crop and is a capable rebounder who drives the ball out of defence. His endurance is still building – being his first season in an elite junior program – and he is not a huge accumulator of the football, but he is a no-fuss footballer, who averages a rebound every three disposals.

If you watched Blanck throughout the season, both for Eastern Ranges and Vic Metro, the standout feature of his game is his closing speed, a vital component of a key defender’s game. It is no surprise to see him clock sub three seconds on the 20m sprint in the pre-season, but the most interesting result was his first 5m – an unbelievable 1.001 seconds, ranked first of all combine invitees that tested. It also helps that he is a clean spoiler of the ball, often getting a full fist to the ball and cleanly punching it, rather than slapping it away. These two strengths make him a very solid key defender prospect.

Other strengths in Blanck’s game are his rebounding and intercept marking. He reads the play fairly well and is able to get into positions to either mark, or spoil the ball, and then extract it out of the danger zone. By hand or foot he is reliable, running at about 65 per cent to be a clean ball user when given the opportunity. While he does not win a heap of the football, he is still able to amass plenty of rebounds and looks capable to play a role as a key defender at AFL level.

Blanck is considered quite a raw prospect, having come into the Eastern Ranges program late, he still has a number of areas of which he is working on, and will continue to work on, during the season. His endurance is a big thing, recording 20.3 on the Yo-yo test in the pre-season, he will have improved that since, but it is attributed to having just played local footy prior to this year. Likewise, he is still skinny compared to other key defenders in the draft frame, and is a little while off competing against the monsters of the AFL. Blanck is really suited to the athletic type forwards, and can be outmuscled by the stronger forwards, such as South Australian Hugo Munn at the National Under 18 Championships. He has had some goals kicked on him in quick succession at times – such as Calder’s Jake Riccardi down at Werribee with three in a quarter – which is something he will learn from.

Overall, Blanck is one of the surprise packets of the 2018 season, coming from a long way back to make Vic Metro and then play a couple of games and show his wares on the big stage. He uses the ball well, can close down an opponent with his acceleration, and does the defensive things right. He has a few areas of improvement to work on, with some more seasons in the gym, bulking up his frame and building a tank, while continuing to learn tricks to cope with different forwards. He is one in the mix late in the draft, or as a rookie as he is a long-term prospect more so than a short-term one.