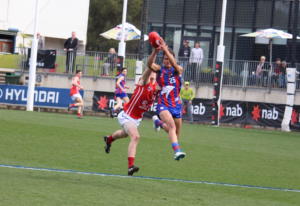 DRAFT ANALYSIS: “Ugle-Hagan is arguably the best player in this year’s crop; an athletic key forward who has the happy knack of clunking high marks and kicking bags of goals.” – Michael Alvaro

Jamarra Ugle-Hagan has been billed as the consensus number one choice among this year’s crop, a tag which may not entirely come to fruition come draft time given his ties to the Western Bulldogs’ Next Generation Academy (NGA). Originally from Warrnambool, the 18-year-old began his NAB League journey with the Greater Western Victoria Rebels in 2018, before a scholarship at Scotch College in Melbourne’s East saw him land in Oakleigh’s zone. He starred in the Chargers’ stacked premiership side last year, booting 24 goals across nine appearances after also running out for Scotch in the APS Football competition. His athleticism across the board is frightening, with the left-footed key forward drawing early comparisons to Lance Franklin for such traits. Ugle-Hagan’s overhead marking is another asset which sets him apart, lending to eye-catching moments and a heap of upside. Bulldogs fans will undoubtedly be itching to see what he can do in the red, white, and blue as early as in his debut season.

Many of the weapons in Ugle-Hagan’s arsenal combine to make up the attacking machine he has proven to be. His back-end of last year’s NAB League season was remarkable, averaging 11.3 disposals, 6.1 marks, and 3.3 goals across seven games from Round 10 to the Grand Final. Spearheading the Oakleigh forwardline, Ugle-Hagan was able to showcase his rare athleticism and attacking acumen inside 50, taking full advantage of the elite delivery which came his way and allowing traits such as his speed, vertical leap, and overhead marking to shine. When all of his best assets come together like that, he is truly a marvel to watch in the front half.

Breaking down each attribute individually, Ugle-Hagan’s vertical leap is one of his most prominent strengths. While he has marking on the lead down to an art form, the 18-year-old also catches the eye with more spontaneous aerial efforts. He remains quite light, but Ugle-Hagan is near-unbeatable in the air, particularly when allowed a clean run at the ball. If given an inch, he can take a mile and punish defenders who fail to keep touch by maintaining separation or holding onto one-grab marks at full stretch. His vertical aptitude also allows him to take the ball at its highest point, a skill which is difficult to combat for any defender.

Again tying into his athleticism, Ugle-Hagan has terrific speed off the mark which aids that ability to break away from his direct opponent. It is particularly evident when leading, as he is hardly ever caught and impossible to get a spoil on when he is so far ahead. Add to that his reach and leap, and defenders stand little chance of preventing the inevitable. That kind of athleticism also lends to his versatility, as Ugle-Hagan has been sighted playing down back for Scotch College and also during the Under 17 Futures All-Star showcase. Further harnessing that ability could make him an even more valuable commodity going forward. Down back, he utilised his leap and reading of the ball in flight to impact aerially, while also competing well at ground level to sweep the ball away.

Speaking of ground level work, Ugle-Hagan proves quite poised and nimble on the ball while also applying punishing defensive pressure. His closing speed is terrific, and became particularly evident during last year’s finals series as he matched Oakleigh’s around-the-ground pressure. With such clean hands, Ugle-Hagan can win the ball in a variety of ways and has the agility and awareness to escape would-be tacklers before getting a disposal away. While that poise is a handy trait, it does not always translate to Ugle-Hagan’s end product in terms of disposal. He tends to use the ball well in the attacking half and has neat skills, but can also turn the ball over under pressure. He can also prove a touch hit-and-miss with his conversion in front of goal, so it seems more of a consistency issue rather than a glaring fundamental flaw.

The aforementioned run of Ugle-Hagan during the back-end of last season was also indicative of his game-winning ability, another reason why he is so highly touted. He can break games open in an instant, able to set the tone with high marks or apply scoreboard pressure with bunches of goals. He claimed six hauls of over three majors for Oakleigh last season, with one particularly memorable outing coming against Sandringham in the preliminary final. Ugle-Hagan finished with 12 disposals, nine marks, and 4.2 and had threatened to take the game away from the Dragons in a sensational opening half. He was in everything coming into Oakleigh’s forward 50, providing a glimpse into the kind of focal point he can be.

While he has proven to be versatile in patches having shown his best form up forward, Ugle-Hagan can further harness that side of the game with his work outside forward 50. He was blessed with elite delivery to match his leads last year and did most of his work close to goal. That is no problem when you are so athletic, can kick bags, and play your role so well, but Ugle-Hagan’s endurance and marking ability could be just as dangerous at centre half-forward, rather than full forward. The pressure of AFL football is traded off for arguably better forward 50 entries, so Ugle-Hagan could well still have a profound impact in his typical role from the get-go. He is also filling out quite nicely at 90kg and has the capacity to impact in bursts across his first year of senior football.

It is extremely difficult to see Ugle-Hagan lasting longer than the first few picks. As arguably the top talent available, Adelaide would not be remiss in placing a bid with pick one, which would swiftly be matched by the Bulldogs – costing them the maximum 3000 draft points. Should Adelaide pass at the first time of asking, Ugle-Hagan will almost certainly be snapped up within the next couple of picks, with the 1-5 range perhaps even a touch generous. The Bulldogs’ end-of-season hand (picks 14, 40, 53, 89) would quite comfortably see them enter points deficit from any top five bid, but they have plenty of time during the trade period to scramble some extra picks and points, especially given some of the movement rumoured to be occurring.