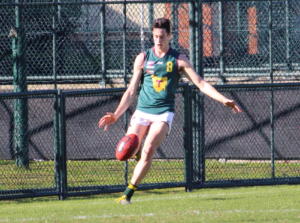 PREDOMINANTLY used as a key defender, the versatile utility has shown the capacity to play at either end for Tasmania this season. He still has to add further strength and build into his body for the role, but he was consistent at both intercepting and nullifying opposition players. He worked well on the last line of defence and was strong in the air to both spoil and mark the ball one-on-one. At times he could go forward and provide a marking target, with his consistency to perform a strength across season 2019. Steele’s next step is adding more strength and bring more consistent when disposing of the ball, averaging just the 47.7 per cent efficiency this year from 14 games in the NAB League.

DRAFT CENTRAL’S INTERVIEW WITH JAKE STEELE AT THE 2019 ROOKIE ME DRAFT COMBINE: