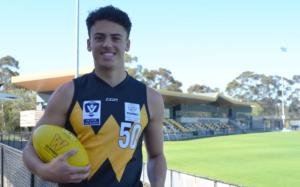 A hard working key forward, the former Calder Cannons player stepped up at state level. In his first full year at Werribee, Riccardi won the Fothergill-Round-Mitchell Medal as the best young player in the VFL. The past 13 recipients have gone on to be drafted, and with a consistent year, strong hands and a high work rate, Riccardi is a readymade forward option. He was quite raw in his few years at TAC Cup level with Calder, but showed promising glimpses – including in a five-goal performance at his would-be home of Avalon Airport Oval in late-2018 – which he now looks to have returned more consistently and at a higher level. Riccardi’s size and the potential to play different roles inside 50 still makes him a prospect with scope, able to kick a bag and rip the game open with high marks on the lead.