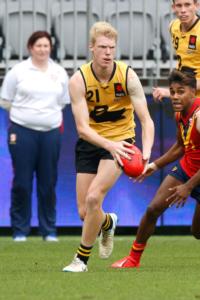 DRAFT ANALYSIS: "A consistent and reliable defender who has played at all three levels of WAFL this season, and has worked hard on improving aspects of his game."

JAKE Pasini is a key position defender from Swan Districts. The 18-year-old from Caversham got a taste of all three grades in 2019 and was a key member of WA’s very impressive defensive unit during the national carnival. He is the leader of the Swans defence where he combines exceptionally with teammate Brenton Hilton. Pasini was without doubt one of the most influential players in the first half of the Colts season and his absence due to state commitments was a catalyst of the faltering fortunes by the Black and Whites during the latter part of this season.

It might be a big comparison to make but there are certainly some traits of Pasini’s play that are similar to Jeremy McGovern. Pasini has developed some tremendous footy smarts such as knowing where to position himself and structuring the defensive set-up. That ability allows him to leave his man and intercept possession leading to a counter-attack for his side. Pasini is also a precise and beautiful kick and has the confidence in his ability to take the game on, often running the ball from the defensive 50 and driving it into the attacking half. In the state carnival he played as more of a stay at home defender averaging 10 disposals, three marks and two tackles. His best game came against Vic Metro where he had 10 disposals and six marks. In club ranks it was certainly not uncommon to see the defender rack up disposal numbers in the high teens and low 20s. Pasini gathered 22 disposals on a couple of occasions, the latest being in round 20 against Claremont in what was a game of a exceptionally high standard. A good test of the development by a player is to see how they perform at the next level and Pasini certainly did not look out of place in Swans’ league side. In the round 19 fixture against Peel, Pasini had 12 disposals, five marks and three tackles.

Pasini stands at 193cm, but if he is to play a similar role at senior level he will need to add some bulk to his frame. He currently comes in at 82kg which will be something he wants to build on at the next level to take on the bigger key forwards. Similarly, his closing speed on the lead could be improved, though his footy smarts and ability to take the game on is able to cover that area of improvement for the time being, though his versatility is another area which could be developed with just minimal midfield minutes for a player whose size and footy strengths could be benefited by developing into a midfielder. At it currently stands, he could well play a role as a tall half-back flanker as he has the skill level to play that position. Pasini takes great inspiration from the performances at the highest level by former Black Swans defender Sam Taylor at GWS, and despite not being able to test at the AFL combine due to shoulder surgery, he shapes as a really worthwhile selection in the mid region of the draft.