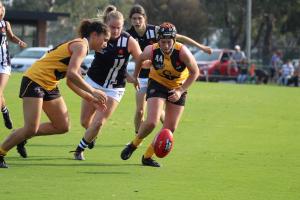 Jaide Anthony is a player who has been in the spotlight for a number of years now, coming through the Dandenong Stingrays’ V/Line Cup program and progressing through the junior pathways to even be an AFL Women’s Academy member in her bottom-age year. Anthony put together a consistent 2021 season ahead of the AFLW Draft.

Having collected the Vic Country MVP this year, Jaide Anthony showed why she is one of the most talented players in the draft crop. Possessing some terrific eye-catching traits, Anthony is one of the more courageous players going around, not afraid to put her body on the line in the air or at ground level. Unfortunately, she has dealt with a couple of concussions this year, but they have not stopped her impressing both through the NAB League Girls and AFL Women’s Under 19 Championships.

Along with her courage, Anthony has natural footballing ability with a clever ability to read the play in the flight and not only pull-down marks, but use the ball well by hand or foot. Her footy IQ is clear for all to see, and it comes out through her decision making coming out of defence. Anthony has shown she can play in multiple positions, but with her skills and smarts, running off half-back is the natural progression for her.

In terms of an improvement, endurance has been a key focus for the top-age talent, and whilst it does not impact her game because she often plays deep or in the defensive 50, she has the smarts and upside to play through the midfield in the future. Once she builds a greater tank and improves that aspect of her game, she can add more strings to her bow up the field. Overall her consistency throughout the season was fantastic, and why she was rated in the top dozen prospects from Victoria in the Draft Central Power Rankings.

“A really smart player who knows the game well and reads the play behind the ball, Anthony was a member of the AFL Women’s Academy as a bottom-age talent last year. She showed why through an outstanding yet interrupted season, copping a couple of concussions – including in Vic Country’s win over South Australia at the AFL Women’s Under 19 Championships – to still perform at a high level. She won Vic Country’s Most Valuable Player (MVP) award, and proved through her actions to be an incredibly courageous player. Whilst standing at 166cm, Anthony is not afraid to go up in the marking contest and bring the ball down, and when she does have ball-in-hand, her kicking is outstanding. A talent who teammates can trust with ball-in-hand, and she has spent time up forward as well at times, kicking a goal in the Stingrays’ loss to the Geelong Falcons in finals.” – Peter Williams via “2021 AFLW Draft Positional Analysis: Tall/Medium Defenders”

“The Vic Country MVP, Anthony was one of the standout performers for the game with her defensive principles, especially positioning, playing a big part in the big margin, as she got front position in every contest to consistently intercept balls that were rushed forward, willing to push up the ground to win those intercepts high up on the wing and keep the pressure on the Queensland defense. Able to win one-on-ones consistently, even the marking contests, it became evident that Queensland eventually looked to avoid the side of the ground she was on when in transition, pushing Anthony deeper down back to make some goal stopping plays in the final quarter.” – Declan Reeve via “Top Performers – AFLWU19 Championships: Vic Country vs. Queensland”

“Recently crowned as Vic Country’s MVP of the Under 19s carnival, Anthony has enjoyed a stellar year of pathways football. The 17-year-old is a great competitor both in the air and at ground level, which is complimented well by eye-catching athletic traits and sharp skill on the ball. While she reads the play beautifully in defence, Anthony is also able to roam up the ground or swing to the other end, with her versatility another tick in terms of upside. She has also gained VFLW experience with Port Melbourne.” – Michael Alvaro via “2021 NAB League Girls team review: Dandenong Stingrays”