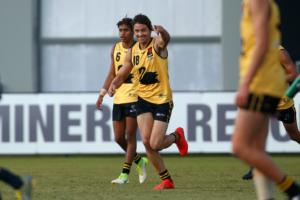 DRAFT ANALYSIS: “Jackson is a big-bodied inside midfielder who has the capability to push forward where he can be a threat.”

ORIGINALLY from the Chapman Valley Football Club in Geraldton, Jackson is a big-bodied inside midfielder who can also be a threat when stationed in the forward line, similar to how Richmond’s Josh Caddy plays. He is a bull in the midfield often throwing his body around to win the contested possession for his team. However due to his crash-and-bash style, Jackson does not boast the same finesse by foot, but he has the capability of being a solid player at the next level.

When playing as a midfielder, Jackson loves to throw his weight around at the stoppages to win the clearance for his team. His core strength allows him to stand up in a tackle before handballing out to a team-mate in a better position. Over the past two seasons, Jackson has demonstrated a desire to work two-ways and his intent to tackle with vigour does inspire his team-mates. When stationed up forward, Jackson has a good burst of pace which allows him to break away from his opponent on the lead. He is also capable overhead making him a difficult match-up for opposition defenders. The major queries about Jackson relate to his skill execution and his decision making. Sometimes he can be a bit too “handball friendly” even when a kick is the better option. However, once he is in an AFL environment, Jackson will quickly improve this aspect of his game. While there is still plenty to develop on that offensive trait front, Jackson has some strong defensive traits and willingness to improve, which will hold him good stead for the future.