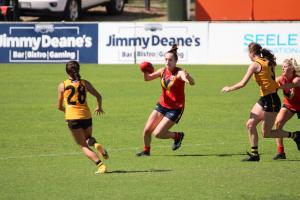 Jade Halfpenny is a top-age prospect who missed out on being drafted in 2020, but returned to add more strings to her bow, pick up a midfield role with Norwood in the SANFLW and then represent South Australia at the 2021 AFLW Under 19 Championships this year. A year on, Halfpenny has nominated Western Australia in the hope of being selected by either Fremantle or West Coast.

Jade Halfpenny looms as a great value pick-up for a West Australian club in a draft where there are not a great deal of talented talls. Halfpenny not only offers height inside 50, but athleticism and versatility as well. She is strong overhead, good one-on-one and can create separation on the lead, which makes her such a damaging forward. Whilst self-admittedly she has to improve multiple areas across her game to improve some of her fundamentals, her work as a whole is at a standard where she could compete at senior level.

Having plied her trade for Norwood in the SANFLW, Halfpenny spent time onball this year, and used her strength, and speed out of a stoppage to win plenty of clearances and contested ball. She showed she could play inside, outside or up forward, and even had to pinch-hit in the ruck at times during the AFLW Under 19 Championships such was her versatility. Going forward, Halfpenny has plenty of improvement left in her, and she is one who could certainly provide a target inside 50 at the top level, and has traits that are hard to learn. If given the chance, expect Halfpenny to be more ready than most to step up, and is a valuable addition to any side.

“Able to show her wares at the AFL Women’s Under 19 Championships, Halfpenny spent more time in the midfield this year after predominantly being a half-forward and outside midfielder in previous season. Averaging 10.6 disposals, 2.5 marks, 3.1 tackles and 2.5 inside 50s, Halfpenny still kicked the four goals, but also had the 1.7 clearances per game. With plenty of growth for development, Halfpenny was able to transition into a new role and look comfortable in 2021. The teenager also earned a place in the SANFL Women’s Team of the Year.” – Peter Williams via “2021 SANFLW team review: Norwood”

“With a tough game on their hands, it made it very hard for Norwood to win the ball themselves, luckily Halfpenny used her legs to keep attempting at the second efforts after fumbling the ground ball, but continued to track the ball, this showing the willingness to never give up and to keep going even if it may not be going your way, and that was shown. She kicked long inside 50, almost gave off a goal assist with a deep long kick 14 minutes into the third term, but Erika Sporn could not quite cleanly kick it off the boot. Halfpenny took an intercept mark at half-back and delivered short to Leah Cutting in the final minute of the match.” – Brooke Hards via “2021 Academy Watch: SANFL Women’s Preliminary Final”

“Had some busy moments, particularly in the first half where she set the tone by putting her body on the line. After doing that on the wing, the forward-midfielder went forward and took a great mark on the lead, but her shot floated to the top of the goalsquare. Halfpenny continued to present well and win the ball in the forward half of the ground, and whilst she has had bigger games, still had some nice moments.” – Peter Williams via “2021 Academy Watch: SANFL Women’s Semi-Finals”