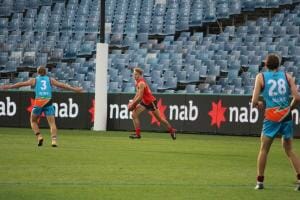 Jacob Kennerley has had an excellent season all round at College, South Australian National Footballl League (SANFL) Under 18s and also National Under 18 Championship level, being a consistent performer in every competition. The Rostrevor student and boarder from Cummins has shown that he has electric pace and has settled into his sides as a natural fast running, yet accumulating wingman. Kennerley has excellent decision making and his ball winning ability makes him a draft prospect along with his exceptional running ability.

At the National Under 18 Championships, he showed his consistency by playing in every game, and continued to rack up possessions while being a key driver in moving the football into the forward 50 for SA. His decision making and skills were excellent, and he was a key contributor to the success of the SA campaign.

Despite playing mainly on the outside as a wingman/high half forward for South Australia Under 18s, Kennerley showed his true abilities at SANFL U18 level for Norwood in his 12 games. Kennerley finished the SANFL U18 season with 11 goals from his 12 games, and having played mainly midfield, showed how damaging he can be when pushing forward. Kennerley is a damaging player with the ball when given space, yet he did manage to consistently win clearances for the Norwood side all year, and was leading possession winner. He was critical in the first final for his side, and showed a true all round game with 38 possessions (17 contested), 14 marks, 7 clearances and a goal in a dominant performance. Jacob was a class above at times in the U18 competition with his running ability and this certainly assisted him in working to contests and always staying involved in games.

During the recent AFL combine, his 2km time trial performance was record-breaking in a time of 6.04, which considering the quality of recent years, was an exceptional effort. He is a running machine that is capable of high speed and endurance in games.

Kennerley’s football has raised a level this year, with continued consistency in all games, and uses his strengths of speed and running ability to be the cornerstone of his game. He would often be a hit up target for his team out of defence often in space, and then continue to accumulate possessions at both ends of the ground. His natural position of wingman was evident, but he did win his share of contested football, and especially around ruck contests where he would use his pace to break away.

His role in all levels was key to linking his team inside 50 and when within goal scoring range he showed he is an excellent kick and always damaging.

Whilst Kennerley managed to consistently find the football, the next area to improve which given his pace will come quickly is his tackle pressure. Often with the football he was impossible to catch, but by adding the additional pressure on opponents in game would make him even more damaging and versatile.

Kennerley’s size is currently perfectly suited on the outside of contest, so by adding some extra bulk over a few pre-seasons while maintaining his speed would make him a damaging inside player as well given his ball winning and clearance ability.

Jacob Kennerley is one of the most damaging wingman in this year’s draft crop, having all the attributes suited to the role. His running ability sets him apart from similar players, but added to this is his excellent skills and decision making which make his game well rounded. He needs to build more size and added further tackling pressure, but expect the South Australian midfielder to feature somewhere in the second round onwards.