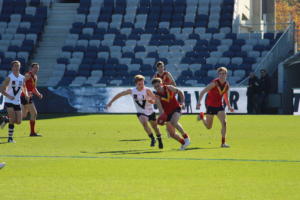 DRAFT ANALYSIS: "A strong, smart balanced midfielder who consistently wins his own footy and uses it effectively for his team."

AS a Port Adelaide potential father/son pick (son of Darren) there will be no doubt Jackson Mead will feature high in this years draft. Mead has had a consistent year at every level, being SANFL Under-18, SANFL Reserves, SANFL League, as well as part of South Australia’s Under-18 Side at National Championships. Mead has played majority of his football on the inside of the contest, so is always around the footy and has shown he can continually win his own ball. His ball use has been a highlight all year with rarely wasting a possession and generally making good decisions. He was rewarded with an All-Australian selection in the Under-18 side after the National Championships highlighting his consistency and ability against players at the highest level, as well as making his SANFL League debut for Woodville-West Torrens Eagles.

Although Mead is on the smaller side for a modern midfielder, he has shown he has a consistent ability to win the ball inside and around the contest, and get the game moving for his team. He can evade well in traffic, and with ball in hand will make decisions that always help his team. His clearance work at Reserves level for 2019 was a key feature of helping his side make the Grand Final, and at the U18 National Championships was often first player with hands on the footy. Mead is generally a one grab player in close, and this allows him to be clean with ball in hand and use his skills to deliver the ball effectively. He has an evasive side step, although at times can try a bit to much whereas his first instinct is best. He showed great leadership for his age, and his decision making when having time and space is impressive, given he can use the ball well and hit targets down the field. While his tackling pressure could improve in and around the contest, he is a balanced ball winner and despite his size, still has a crack and wins the ball.

His combine testing was of a high level, and very good in all areas showing his all round ability. He can look to improve his first burst of speed from the contest, as by adding this to his game will really make him a future damaging midfielder. Mead’s first movements can be to evade or handball, but whenever he gets the footy he consistently finds a teammate and his season at Reserves level had him at 73 per cent efficiency. With Mead aiming to get more footy forward of the ball will raise his game even further. With high level skills and hitting the scoreboard more or hitting forward targets he could become an exceptionally damaging player. His ball winning ability is clear, and aiming to get more than 20 possessions a game as he averaged in 2019 will help any side he plays for, though no doubt Port would be keen to sign up the talented midfielder. His footy smarts allow Mead to have a high level of development ahead of him, and expect a bid to come somewhere in the second round.