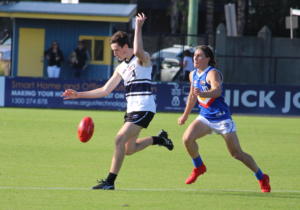 CAPTAINED the Northern Knights this season, Davies transformed his game from the first half of the season to the second half, being one of the more dominant players in the run home to finals. His intercept marking and long kicking was a treat, fixing areas of his disposal which plagued him earlier in the year. His leadership and consistency were standout qualities, and is a traditional footballer.

He was one of a handful of Knights to also try his hand for Vic Metro early in the year in the trial games but could not break into the final squad, but really came into his own for Northern with a good mix of consistency and eye-catching performances. Davies grew in confidence, reading the play beautifully and flying high to clunk some of the better contested overhead marks in the NAB League this year. He was the leader in a Knights defence which sometimes found itself under siege, providing a cool head in crises and putting his hand up as a safe late option with some appeal.