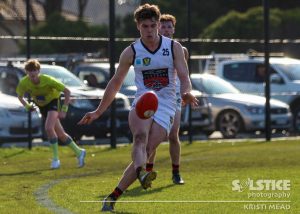 Jackson Callow is somewhat of an old school centre half-forward with natural football abilities and is proven at senior level. Plying his trade at North Launceston, Callow is an elite contested mark – arguably the best in this year’s draft crop – and often out-muscles his opponents. He is not the most athletic player going around, which is the tradeoff from his sensational strength and goalkicking prowess, but could slot into a senior line-up sooner rather than later.

A big knock coming into the year on Callow was him being pigeonholed as a pure key position forward who had dominated against smaller defenders. In 2020, Callow not only stepped up to continue his late season form with North Launceston as a middle-ager, but even spent time in defence and pinch-hit through the middle. In a starring performance against fellow title contender Launceston under lights, Callow was best on ground playing as a rebounding defender, something he had only done in seldom.

While his ability to clunk marks and read the ball in flight has never been questioned, Callow is also an accurate set shot for goal, and one player who can really kick through the ball regardless of distance. He keeps it simple, and often when taking his set shots, even the ones he misses remain straight. One-on-one inside 50 he is hard to dislodge, and with his velcro hands, Callow will hardly drop a mark.

The only way for a defender who is not a monster key position player to stop Callow marking it is to allow him to have front position and lead, or to have a third-man come across to spoil. Callow is okay in terms of his straight line running, he recorded a 3.08-second 20m sprint which for a player who tips the scales at more than 100kg and 194cm, is pretty good. But speedier, smaller defenders will give him the chance to lead and back themselves to close him down. If he engages in a one-on-one then it is pretty much game over for any opposition.

Callow’s biggest area of improvement is his agility and athleticism, so while his speed is okay for a big man, his agility clocked in at nine seconds flat. Given his strengths, the tradeoff is his mobility, but that is not what you would be getting him for. What Callow offers is a reliable leading key position player who can clunk grabs and then go back and make the set shot from any distance with reliable accuracy.

At this stage while it is hard to predict where many prospects will fall, Callow is viewed as a mid-to-late draft prospect. The top key position forwards such as Jamarra Ugle-Hagan, Riley Thilthorpe (dual position ruck) and Kaine Baldwin are all rated inside the top 30 on pure ability, and then comes a number of even key position options after that, of which Callow is in that group.

If you are looking at consistency at senior level, then Callow has provided that through the TSL, and while it is unfortunate his season ended abruptly due to injury a few weeks ago, he put together enough body of work to suggest he can have an impact at AFL level and even provide value for a team that is perhaps closer to being a contender in the near future and wants a key forward with medium-term impact rather than long-term development.