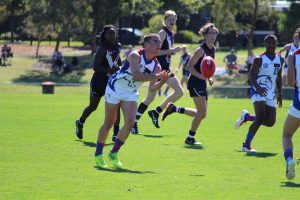 SUMMARY: Jack Ross is a player who has flown under the radar to put together a very impressive year amongst a raft of stars in the Oakleigh Chargers midfield. A TAC Cup mainstay, Ross has shown signs of an all-round midfield game with a good mix of aggressive ball winning, and outside class to deliver well by foot. Given he wins his fair share of contested ball, with an average of 5.4 clearances while kicking the ball long 28.7 per cent of the time, Ross’ disposal efficiency is highly impressive and a testament to his decision making when given time and space. That mix of class and aggression is rare, and puts him in good stead for making an impact at the next level with his 86.7kg frame. Given his power, Ross’ 20m sprint time of 2.95 seconds makes sense, but he could look to use that more when bursting from packs. Despite his aggressive approach, Ross can also improve on his tackling numbers, averaging just 2.4 as a midfielder who often finds himself in the clinches. As a power-based athlete, endurance is also something Ross should improve to become a more dominant midfielder and run out games with more than his average of 20.5 disposals. There is not much Ross can’t do as a midfielder though, and he looks like a ready-made prospect.