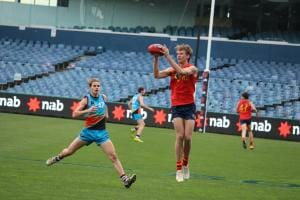 South Australia’s Jack Lukosius is undoubtedly one of the most talked-about draft prospects in recent memory. Regarded by some draft watchers as a once-in-a-generation talent, Lukosius has played predominately as a key forward at state, club and school level, but has also demonstrated his skills at centre-half back from time-to-time. In 2017, ‘Luko’ played all four games for South Australia at the National Under 18s Championships as a bottom-ager, booting five goals and reinforcing his credentials as a serious talent to look out for. Later that season he made his senior South Australian National Football League (SANFL) debut for Woodville-West Torrens at age 17, booting four goals. If that was not impressive enough, the game happened to be a preliminary final. From that point on, Lukosius was a mainstay of the Eagles side, adding a point-of-difference in attack as that roaming third-tall. Expected to be the headline act in a star-studded South Australian side at this years carnival, Lukosius averaged 14 disposals, seven marks and kicked nine goals in his four matches – consequently named an All-Australian in what was a strong, yet expected set of performances. Upon returning to the SANFL post-Championships, Lukosius continued to fit seamlessly into the Eagles side, using his strong aerobic capacity to take bags of marks all over the ground as his side marched into the finals, ultimately loosing to eventual premiers North Adelaide in the preliminary final. Although it was a quiet back-end of the year, the highly touted tall performed strongly at the National Draft Combine and has constructed a serious body of work to tempt recruiters.

Perhaps Lukosius’ best attribute is his kicking. Jack has some of the best foot skills in the draft pool, as was emphasised by scores of 23/30 and 25/30 in the kicking and goalkicking tests in Octobers National Combine. You would be hard pressed to find a cleaner, more fluid action than his, both in general play and when kicking for goal. Lukosius is not afraid to back his skills in-game, pinpointing more difficult options at will in a best-on-ground performance against Western Australia. Additionally, the blend of speed, agility and mobility allows him to effortlessly gain separation between his direct opponent on the lead, at-times gaining 10-20 metres of separation and appearing as if he has no match-up at all. Many defenders simply do not have the capacity to keep up with him for the games entirety. When the ball hits the deck, Lukosius remains in the game thanks to his cleanness below his knees – a trait rarely associated with a player of that size.

Unlike many other early selections in recent years, Jack Lukosius is not your stay-at-home key forward. A key component of his game is his ability to venture off down the wings to help link up the play. It is not unusual to see him pop up around centre half-back when the ball is down in the opposition half. He has a strong endurance base (reached level 21.2 in the combine yo-yo test) and is able to cover enormous distances in his travels. This allows him to collect tallies of marks relatable to that of St.Kilda great Nick Riewoldt, the great majority of which come in an uncontested manor. Not only does Lukosius have the skill, athleticism and work rate, the Henley High School product is also a very intelligent player. At-times he appears to be floating across the defensive half of the ground, positioning himself perfectly to take an intercept mark. Although a smaller observation, it was worth noting that Lukosius, particularly in the game against Victoria Country, hovered approximately 30-40 metres out from goal when the opposition was kicking-in and was able to drift in and intercept on a couple of occasions. The SA vice-captain has also been known to conjure a clever handball out the back when necessary. He also uses these smarts to position himself in a space where he is able to help link up the play when down in defence, but also give himself time, using his speed and endurance, to impact in attack when the ball moves forward.

Whilst there are very few flaws in his game, clubs wanting a dominant, contested-marking key forward will struggle to find those qualities in Lukosius. As has been previously mentioned, ‘Luko’ is not the type to haul down a big contested mark or break open a pack. In-fact, he may not even fly for these marks, instead preferring to stay balanced at ground level where his cleanliness and skills hold him in good stead. This may be as a result of his lack of strength. At 196cm and 84kg, he has at least a couple of kilograms to build up, which will be no problem for clubs when he enters their elite programs. However he will never be that monster key forward, and clubs will be well aware of this, as Lukosius offers plenty of other attributes.

Put simply, Jack Lukosius has a set of attributes you just cannot find in players of his size. With a unique ability to run his opponent off their feet, along with his sublime foot skills, serious speed, endurance and the football smarts to match, Lukosius has all the makings to be a serious threat. All that is left for clubs to do is build up his strength in the gym. He has runs on the board at senior level, having kicked 18 goals in 14 games at SANFL level across two-seasons at Woodville and performed strongly in eight games for the Croweaters at the National Under 18 Championships level in ’17 and ’18. Lukosius is the type of player who could well break marking records if his early-career statistics are anything to go by. Not often are talls able to come in and play straight away, however Lukosius’ versatility makes this a genuine possibility, whether it be as that third-key forward, on a wing, or even as an intercept marker/kicker across half-back. In a bumper-crop of South Australian talent, Jack Lukosius is the pick of the bunch – arguably the best player in the draft pool, a future star of the competition and one who seems destined to give many defenders headaches over the next ten to fifteen years.