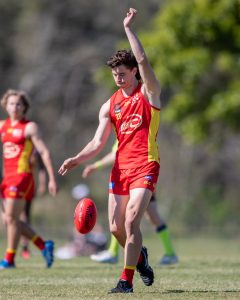 DRAFT ANALYSIS: “Johnston is a solid key defender who competes well aerially and is a sound user by foot for a player of his size.” – Michael Alvaro

The depth of Gold Coast’s academy talent this year is no secret to keen draft followers, and Jack Johnston is prospect the Suns may consider come crunch time. Standing at 195cm, Johnston is an athletic centre half-back who not only gets into good positions to intercept aerially, but also contributes with his sound disposal across defensive 50. The 18-year-old has been a staple for the Suns Academy over the last two years, turning out a handful of times during their 2019 NAB League stint, and captaining the team during this year’s Academy Series. He was also part of Palm Beach Currumbin’s senior side which made it to the second week of QAFL finals, and had already earned selection in the Under 18s Allies squad as a bottom-ager, among other representative honours.

While Johnston is often lauded for his efficiency on the ball considering his physical makeup, the key position fundamentals also make up much of his overall game. His vertical leap – measured at more than 70cm off both feet at the Queensland Draft Combine – goes a long way to helping him compete for overhead marks. More often than not, Johnston is seen either leaping from the back of forming packs, or straight up from underneath the flight of the ball in order to create a contest.

That is where his ability to bring the ball to ground comes into play, should he be unable to hold onto the intercept mark. More consistently clunking those marks is something Johnston can work on, especially in contested situations. While his testing results may show great athletic attributes, he could certainly benefit from being a touch more explosive and definitive in contested situations to better crash packs and take those eye-catching marks.

But for now, as mentioned, Johnston is adept in creating a spillage at the least. He gets to a decent number of contests and while he may not necessarily always split them, he does enough to impact his opponents. This is most often seen in one-on-one situations, where Johnston’s positioning and strength combine to ensure the opposition forward keeps clear of the drop zone, or to allow him to get a fist in. A lot of trust is then put into his smaller defenders to mop up, but Johnston is not afraid to get involved in the rebound chain as well.

Johnston’s composure on the ball and ability to hit targets by foot is important, especially within the Suns Academy system. As he participates in the short-kicking game from side to side, Johnston provides a safe outlet with neat kicks while also directing the play. He often looks to move the ball on quickly, a trait which sometimes sees him lacking a target in the long range, but could prove handy with some refining.

The Gold Coast Suns are going to be forced into a few tough calls with their Academy pre-listings this year, with two painted-on top 25 talents destined for a spot each, leaving a bunch of others to contest for selection amid oncoming cuts to list sizes. Given key position players often take a little more time to come on, the Suns could opt to keep Johnston in the Academy system as an over-ager and see how he progresses into next year, or take the early chance on him now. Conversely, keen clubs from elsewhere could enter the fold should Gold Coast pass up his services in 2020. Having played some Under 18s and senior footy this year, Johnston has certainly been able to push his case.