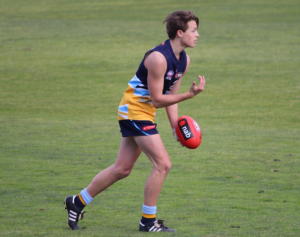 DRAFT ANALYSIS: “Ginnivan is a natural footballer with high footy IQ and an admirable work-rate, particularly in the front half” – Peter Williams

Jack Ginnivan is a player who screams upside and potential, and is one that would be a polarising figure in terms of draft boards. On one hand, the Bendigo Pioneers’ talent has all the traits to make it at the top level, but on the other hand, he still has areas that will need to be improved upon to be a success at the next step. Playing 12 games in the NAB League last year, Ginnivan got better as the season went on and showed exactly what he was capable of, booting 19 goals across those outings which was an impressive effort for a medium forward.

The term ‘natural footballer’ gets thrown around from time to time, and it is fair to say that Ginnivan fits the mould. Outgoing Bendigo Pioneers’ Talent Manager Steve Sharp described Ginnivan as having traits similar to Joel Selwood in the way he was able to draw free kicks at the stoppages. Not a knock on the way he goes about it, but more having the smarts to know when and where the contact was coming, and being able to win the ball from an otherwise 50/50 situation. Without a doubt if he had played this year, Ginnivan would have spent more time up the ground, particularly in the midfield, and even, as Sharp eluded to, at half-back.

Unfortunately Ginnivan was unable to improve that aspect of his game with his midfield development. That, along with his defensive pressure are marked as areas of improvement, given the talented forward is so damaging with the ball, but could improve his work without it. He has natural evasion abilities, and he loves to take the game on. Using the ball well by hand or foot – he ran at 69.4 per cent efficiency – Ginnivan is not afraid to win his own touches at the same time, having to collect the pill in contested situations at a rate of 45.4 per cent. Often forwards are caught in contested areas, and Ginnivan was no different, but he proved an effective user and was able to impact the scoreboard.

Ginnivan’s high footy IQ and goal sense are traits which fans would love to come and watch, and he has that ability to take the game on and create something out of nothing in the forward half. Despite all this, he is still somewhat raw in the way that he has been a predominant forward and is still improving across a number of areas, but that natural ability shines through. It would have been beneficial for him to spend more time up the ground this year to broaden his ability, and while his vertical leap is an area of improvement too, it does not hinder the way he plays. When a player has the capability of winning the ball as consistently as Ginnivan does while also influencing the scoreboard, he has shown he can have a big say on game day.

Ginnivan is rated in the mid-draft region, outside the more consistent first round picks, but in the next log-jam of players. He has the talent to make the step up to the next level, and certainly the tools to further improve. He might be more of a long-term prospect for a club in the future, but he has a lot of upside that catches the eye, so expect a number of clubs to be considering adding him to their lists in the AFL National Draft.