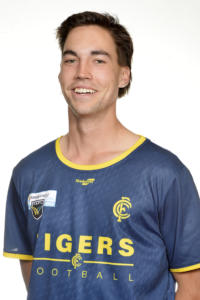 A LATE invite to the combine, Jack Cooley has had an impressive season in the WAFL Colts competition, but saved his best for last, winning the Mel Whinnen Medal for best-afield in Claremont’s premiership. An inside bull, Cooley had 33 possessions of which 18 were contested, as well as 14 clearances, seven tackles, seven inside 50s and five marks to really stamp his name in bold for any recruiters at the game. A good size and does not take a backwards step, the question marks come about lifting his work rate and disposal efficiency as well as hitting the scoreboard more often. In terms of his strengths though, his clearance work, contested ability and athleticism for his size is very impressive. At the State Combine, Cooley recorded 3.06 seconds in the 20m sprint, 8.172 seconds in the agility test, 87cm running vertical jump and a 21.1 yo-yo test.