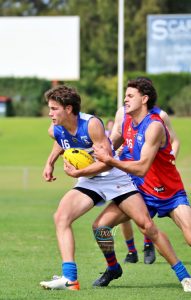 DRAFT ANALYSIS: “Carroll is a versatile midfield option with neat skills, shrewd decision making, and a strong athletic base – all of which drive his ceiling high.” – Michael Alvaro

A broken wrist cut Jack Carroll’s promising top-age campaign short after seven WAFL Colts outings, but the 17-year-old still managed to showcase plenty of the traits which have him pegged as a potential first rounder. The East Fremantle product had previously come to prominence as a classy half-back/wingman, but attended many more centre bounces this season to transition into a more balanced midfield game. While still quite light, the smooth moving left-footer has terrific poise and provides great value going forward with his skill execution on the move. Across his junior career, Carroll has represented Western Australia at Under 16s level, but missed out on the chance to run out in this year’s WA Under 18 All-Star showcases due to his untimely injury. He did manage to register some data at the Draft Combine though, showcasing his exciting athletic attributes. He is also one of the youngest players available in this year’s draft, lending to the prospect of plenty more improvement to come.

Like many players tagged with the trendy ‘upside’ buzzword, Carroll has a diverse range of weapons which help him stand out above his peers. A key trait which he has carried throughout his time in a range of positions has been an elite combination of decision making and disposal efficiency. Carroll is particularly effective by foot, as he can hit targets with ease on his favoured left side and open up the game on the end of carving moves out of congestion. He is the kind of player who you want to be delivering the ball inside 50, as he is often able to lower his eyes and hit-up leading targets. Carroll’s proficiency in this area also lends to his versatility, as he can start his career as a running half-back before transitioning into that classy midfielder.

Something which has aided Carroll’s move into midfield at Under 18s level has been his clean hands. He averaged 22.9 disposals in this year’s WAFL Colts competition and accumulated them in a variety of ways. Most significantly, he was able to swiftly collect ground balls before using his mix of speed, agility, and poise to come away with the pill and dispose of it effectively. At 188cm, Carroll is also the modern midfielder’s height and is one who can jump for big marks. The West Australian proved his vertical aptitude at the Draft Combine with running jumps of over 84cm off either foot, which combines ever so well with his clean hands to enable overhead marking.

Another aspect of that kind of play is Carroll’s courage. He may only be listed at 76kg, but is seldom afraid to run back with the flight of the ball or win it at the contest. Somewhat surprisingly, Carroll led the WAFL Colts this year for contested possessions (15 per game), proving his aptitude in that side of the game. As he progresses as a midfielder, Carroll will need to fill out and build the strength required to consistently compete in the engine room, as he can often go to ground or be blanketed by contact. But once afforded an inch, Carroll takes a mile as his athleticism and outstanding awareness allows him to evade would-be tacklers and be gone in a flash.

Something clubs will undoubtedly also look into is the fact that Carroll is a December-birth, meaning he could well see a greater rate of improvement in years to come compared to those born at the start of 2002. With a couple of preseasons at the top level, his strength will improve alongside that explosiveness which is so important to many athletic midfielders in the modern game. It could also allow him to develop in a range of roles; either at half-back as he is already comfortable with, on the outside, or even at half-forward. Carroll booted four goals from midfield this season and has the class by foot to do so more often. In his most dominant game, he collected 31 disposals and snared two majors against eventual Grand Finalists, Claremont, giving a glimpse into the kind of form he can produce on the end of a consistent run.

That particular game was in Round 7 (of nine), and Carroll’s season was ultimately ended the very next week. It proved a rather unfortunate or freak occurrence as his hand was stood on in the penultimate home-and-away round, causing a fracture in his scaphoid bone. The timing of the injury meant Carroll would not be able to play in the end-of-season All-Star fixtures, but the marked improvements he showed throughout 2020 and his enormous potential have him pitted as a prospect which recruiters will be keen to get into their club and develop quickly.

Carroll has risen steeply this year to be considered towards the end of the first round. He is exactly the type of player that clubs will take a chance on perhaps earlier than what his true value suggests based purely on his potential; a tall midfielder with great athleticism, skill, and poise. His versatility is a big tick too, as he may not quite be ready physically to handle midfield minutes in the AFL, but can bide his time in other roles and make an impact with ball in hand. He may fall into the second round and would prove a shrewd pick in that range for a club which has the capacity to develop a player before throwing them into the deep end. Carroll will also most likely find a home interstate, given Fremantle’s need to cover NGA bids, and West Coast’s current hand coming into play after pick 33.