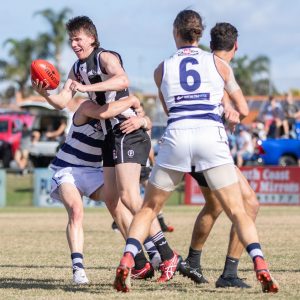 DRAFT ANALYSIS: “Briskey is a highly athletic key position prospect who utilises his full skillset up either end, and even while rotating through the ruck.” – Michael Alvaro

There are very few key position prospects available in this year’s AFL Draft who can match the raw and powerful athleticism of Jack Briskey. A product of the Brisbane Lions Academy, the key position utility is the kind of player who thrives at testing events, doing exactly that during preseason and at the more recent National Combine. More importantly, there is also plenty to like when he enters the field of play. Able to perform up either end or even as an undersized ruck, Briskey has shown patches of brilliance across his junior career in the elite talent pathways. He was a member of Queensland’s Under 16 and 17 squads, shaping up for a shot in the Allies Under 18 side this year. While the National Championships were not to be, Briskey was still able to show his wares in the Academy Series for Brisbane and gained senior experience with Sherwood in the QAFL. He tested well at the draft combine, capping off a solid top-age campaign as he pushes into top level contention.

As a key position utility, Briskey boasts the bones of a complete player but has to add meat to them in terms of his overall footballing craft. His athletic base is something which helps him stand above the rest, most evident through a sizeable vertical leap. Briskey achieved a top 10 result at the recent Draft Combine, leaping 94cm in the running vertical jump tests to showcase just what he is capable of. He translates that number onto the field as well, especially while playing as an undersized 194cm ruck. Through sheer power, he was able to rise and comfortably win hit-outs against taller opponents at senior QAFL level this year, as well as in the Academy Series. His leap is also utilised down back, where he can intercept mark or crash packs – same goes while stationed up the other end.

Briskey is most often started either in defence or attack, where he is much more likely to play at the next level. He has shown some exciting form as a key defender, where his improved reading of the play, aggression, and athleticism all combine well. The 18-year-old is not only capable of rising for intercept marks, but can also utilise his closing speed to spoil and impact a range of contests. That kind of competitive instinct is also seen in his follow-up work, as Briskey hunts the balls which he brings to ground. In possession, he is a touch raw in terms of skill and decision making at times, but has shown good composure when required. It is Briskey’s intent and second efforts which will prove most pleasing to his coaches and teammates alike though, while his athleticism will likely favour the fans.

While he can certainly pop up with impactful plays, Briskey is not yet the finished product in terms of his sustained output. He averaged just 5.7 disposals, two marks, and nine hit-outs as a bottom-ager for the Lions Academy. He may well have upped those rates this year, but it is not like he wins mountains of the ball. Given his role as more of a shutdown defender, those kind of numbers would be understandable and should he look to fulfil his ruck potential, brining that ground-level hunger could also improve his consistent output. As it stands, Briskey is moreso an impact player with plenty of upside to work with and the kind of traits which recruiters will look for in any type of prospect.

While tied to Brisbane through its academy program, Briskey is in no way guaranteed to end up there. The Lions have a bunch of promising homegrown talents who will likely attract interest from other clubs, so some difficult decisions loom for their recruiters and list management staff. There should be some interest in Briskey given his inclusion in the AFL Academy and subsequent attendance of the National Combine. His key traits of versatility, athleticism, and competitiveness are exactly the sort which recruiters look for, while his rawness at this stage only screams potential. It will be a squeeze given the probable cuts to list sizes, but Briskey looms as a choice who could develop strongly over time.