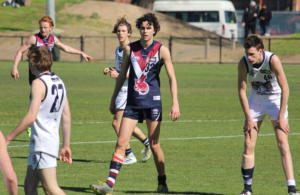 DRAFT ANALYSIS: "A raw but talented tall, Bell plays the second ruck/forward role perfectly, and is strong with a nice vertical leap and contested marking ability, though he must build up a tank and some consistency to take his game to the next level."

ONE of the more talented talls in the 2019 AFL Draft crop, Jack Bell showed he can play a role at AFL level if selected. He rotated between ruck and forward for the Sandringham Dragons this year, and while his season ended early with an ankle injury in the qualifying final, he pieced together a full season leading up to that point. The key position utility might still be light compared to other rucks in the draft crop, but he has a nice vertical leap, good strength and able to clunk marks around the ground. His versatility is another area for clubs to like with Bell showing he is more than capable of playing that second ruck/resting forward role if required. He does have to improve his endurance and consistency, while he was never a huge ball winner, though he worked hard to get into the action and provide a contest for his smaller teammates.

Bell has the traits of a player you can use as a target going forward, whether he develops into that full-time ruck, or a forward who pinch-hits. He is a strong contested mark with a good vertical leap – he recorded 73cm on the running vertical jump at the NAB League Fitness Testing Day which while others had more, Bell shows it out on the field that he can leap above a number of his opponents and get first hands to it. It is a matter of doing it more often, which will be a case of building his endurance further, recording just 20.4 on the yo-yo test on the same day pre-season. His athleticism for a big man is not too bad either, recording 3.10 seconds on the 20-metre sprint and 8.49 seconds in the agility test. While far from elite, many rucks are closer to the 3.2 and nine-second marks, so Bell passes those tests. Unfortunately given his late injury and not testing at the National Draft Combine, he has not been able to further build his endurance, which is something he will be keen to do over the preseason. Given the lack of quality talls, Bell is a chance to be drafted late or in the rookie draft, but like most key position players outside the top few, it is always hard to determine exactly if and whether they will go this season, or down the track.

Aside from the endurance component, Bell averaged just the 9.4 disposals this season, which for a ruck/forward is not overly surprising, but he showed in patches he can find the ball, with a 17-disposal, six-mark and two-goal game against Brisbane Lions Academy earlier in the year, starting a stretch of five consecutive NAB League games which saw him lift his disposal average to 13.6 per game, which is quite healthy. In that time, Bell booted six goals with a goal in every match. He finished the season with 12 goals from 14 games, and taking out the last game which was less than a quarter in, Bell practically booted a goal a game which is handy for that ruck/resting forward. Throughout the season he was predominantly sharing the ruck load with the likes of Riley Bowman and then Andrew Courtney, with Corey Watts also giving a chop out at stages. With the Dragons having an abundance of talls, Bell was able to rotate through the middle and forward to receive adequate rest and have an impact in both roles. He is more of a long-term prospect, but has shown enough in his top-age year to suggest he could be a valuable prospect in the second ruck/forward role, because 200cm contested marking players do not grow on trees at Under-18 level. Raw talls are never guaranteed to go, but getting a National Draft Combine invite is a great step for Bell and his draft chances.