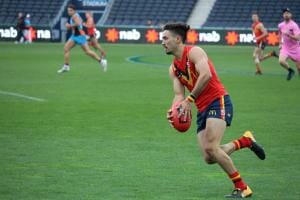 DRAFT ANALYSIS: “Daring small forward match-winner with an eye for the spectacular."

Izak Rankine has been one of the most hyped and exciting prospects to come from the Under 18 National Championships system in a very long time. The small forward/midfielder can do incredible things on a football field that most others would never consider attempting. Spectators and draft watchers were enthralled by his trademark flair and dash, as Rankine was a key component to South Australia’s brilliant championship win. Rankine made his debut as a 16 year-old for West Adelaide in 2016 and wowed draft watchers with his impact on games at such a young age as he brought himself into the spotlight.

The Indigenous speedster first arrived onto the scene after an All-Australian underage year in 2017 and he continued to duly dominate in 2018. In the 2017 post-season National AFL Under-17 All Stars match Rankine was so dominant that he was made to switch teams to even the game, this increased the growing hype. This year saw him bag another All-Australian award as he seemed at times to single-handedly win games for the Croweaters and made his mark in all games of the carnival with the opposition unable to adequately stop him. His outlandish explosiveness and turn of pace has mesmerised opponents throughout the U18 championships and SANFL. His freakish goal sense has massively increased his reputation amongst draft watchers to being arguably the best natural talent in this year’s draft pool.

Those that have watched his sublime 2018 Under 18 National Championships will confirm that Izak Rankine is the best small forward-mid based on his pure match winning ability and penchant for the incredible goals and skills. Rankine’s X-factor is his lightning acceleration and agility, as he loves to take on the man on the mark with ease and has no fear in doing so in continuously in games. Rankine’s ground ball pickups on the move are unrivalled in his draft class as he can continually scoop up ground balls without breaking stride and accelerate towards goal. The most damaging aspect of his game is ball use as he consistently hits targets by hand or foot, displaying his steady composure under pressure to lower his eyes and pick the perfect inside 50 targets around goal. At the National Under 18 Championships, Rankine averaged three goals per game from 15.8 disposals and 3.5 marks, more than one was contested per game.

In one incredible first quarter against Vic Metro in the final game of the carnival, Rankine conveyed his incredible talents kicking 3.2 from seven disposals, as Metro had no answer to the Rankine show. During the arguably best quarter of an U18 championship by an individual player, Rankine showed his damaging goal sense kicking a goal straight out of the air and then kicking one from the boundary line moments later. He also took a brilliant pack mark for good measure and hit targets inside 50 contributing with goal assists. He finished with five goals, 17 disposals, four clearances, and five inside 50s in the win that sealed the championship for the Croweaters. The 2018 championships saw Rankine alternate between midfield and forward as his disposal average increased by four from last season and it continues to lift with more time through the midfield. He has played almost permanently as a forward for West Adelaide but has the ability to play through the middle and is more than capable as ball winner.

To play consistently through the midfield Rankine will need to build endurance that will come with time in the AFL. So far his time on the ball is segmented into short spurts to ensure he doesn’t burn out and leave him with plenty of energy to impact in the forward line. To earn greater midfield opportunity in the AFL he will be looking to get stockier in size to an extent that will stack up against established AFL players, which make him even more explosive from a contest. The other aspect that Rankine has which is similar to other small forwards is his “white-line fever”. His competitiveness and cheeky nature is something fans love to see, but it has cost free kicks, including 50m penalties and earlier in the year, a suspension. You never want to see that intensity or competitiveness go out from a player, but no doubt it will be an area that AFL clubs will want to just keep in check so they do not lose the young star through suspension or give away too many free kicks.

All clubs at the top of the draft will have to consider Izak Rankine, he’s simply an outstanding player that will give great pleasure to any club that secures his services. Rankine is a once in a generation talent and that term should be never used lightly, but it will be a label that will stick with Rankine throughout his whole career. Due to endurance Rankine will most likely see his AFL career start as a forward before earning greater midfield opportunity over time. Rankine appears to be one of the picks with the highest upside and will cause serious headaches for opposition coaches in the future.