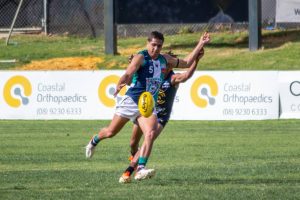 DRAFT ANALYSIS: “Winder is one of the, if not the, most explosive, dynamic and game-changing smalls in this year’s AFL Draft Pool.” – Lenny Fogliani

Eaton Boomers product Isiah Winder is a leading small midfielder-forward prospect among 2020’s potential AFL Draft Pool. In 2020, Winder certainly enhanced his draft prospects with a stunning season. In five games for Peel’s Colts team, Winder averaged 28 possessions, seven marks, five tackles and three inside 50s to finish eighth in the WAFL Colts Coaches and Award and win Peel’s Colts Players’ Player Award. His best performances for Peel’s Colts team came against Perth in Round 1 (32 possessions, seven marks, seven tackles), East Fremantle in Round 2 (26 possessions, seven tackles, five marks, two goals) and Swan Districts in round six (28 possessions, five inside 50s). He also played three games for Peel’s League team, and looked comfortable in a variety of positions, including half-back. In 2019, he finished ninth in the Jack Clarke Medal and ninth in Peel Thunder’s Best and Fairest, capping off his year with a big Grand Final performance. The crafty small also took part in the West Australian Under 18 All-Star fixtures in 2020, further staking his claim as a draft prospect.

A player who has come on strongly over the past 18 months, Winder has a vast array of weapons which catch the eye of onlookers. Winder’s athletic strength was highlighted at the WA Draft Combine, where he finished in the top five of every test, including winning the vertical jump test and the 20-metre sprint. Something which sets him apart it his ability to utilise his athleticism on the field; bursting away from stoppages with speed, zipping around opponents, and rising to take some terrific aerial marks for a player of his size.

Winder also has one of the best kicks going inside 50, often lowering his eyes to spot up a team-mate on the lead or in space. The 180cm prospect is low to the ground and clean in his delivery, able to spear or weight his passes to avoid intercepts. He has also demonstrated an ability to be a threat whenever he is stationed inside the forward 50. He is smart with his leading patterns, strong overhead and is a solid kick for goal. That kind of attacking acumen makes him such a dangerous and impactful player, though he can certainly work on more consistently applying himself defensively.

As exemplified by his roles up either end of the ground at League level, Winder will most likely start outside of his now favoured midfield position in the AFL system. While his speed and skill could combine to apply a great spark when required, he seems a touch more suited to either the classy half-back type, or a small forward role which he has previously taken on. His numbers at Colts level stack up consistently in terms of accumulation, but remaining in the hunt once the ball has gone the other way, and maintaining his intensity will allow him to further showcase his best attributes.

Winder has shown he can adapt well to multiple roles, and his steep rate of improvement suggests he can develop even further in an elite environment. His senior berths were tough going considering Peel’s struggles, but maintaining a competitive edge while showcasing that obvious attacking flair will be important going forward. At his best, he is very difficult to stop and is capable of those fabled 25-disposal, two-goal games.

Winder’s senior experience in 2020 and quite a steep rise in form has put him well within draft calculations. While not a pure small forward this year, he is certainly capable of playing such a role and that may be the position he is drafted in, at least to begin his career. The outside may also be a home for him should he improve his endurance a touch, so there are plenty of options for recruiters in terms of roles he may suit if given a shot. Round 3 seems about the range he may be taken in, and he could provide great value later on given his exciting athleticism and football smarts.