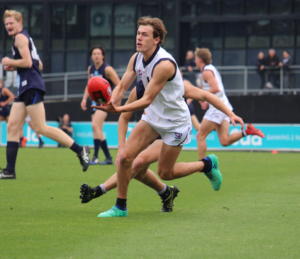 DRAFT ANALYSIS: "A raw prospect with skills and good decision making abilities, Wareham is one who has plenty of upside, as well as improvements going forward."

A QUIET achiever who has somewhat flown under the radar this year, Wareham is a nice user of the football with some raw talent that a club could harness at the senior level. Looking at his numbers statistically many might be surprised by his National Draft Combine invitation, but you just have to see what he does in a game from few touches and understand his impact on a contest. He is a low accumulator and predominantly an outside user, but he ticks a lot of boxes and has an above average ceiling from which he can continue to work on his game. Given his rawness, he is more of a late-rookie prospect, but he has put his name into draft contention after some eye-catching games this year.

The Greater Western Victoria (GWV) Rebels’ midfielder has spent time at half-back with traits that are flexible in either position. His strengths are his kicking, decision making, spread and outside game, making him perfect for a wing role in the future. He managed to play two games with Vic Country at the Under-18 Championships and showed off his daring plays such as taking the game on straight down the middle against Western Australia at Marvel Stadium to evade a couple of opponents. At times it can come unstuck, but he is able to think through his next move and work his way through traffic. Wareham works hard to get into ball-winning positions and tries to free himself up to move the ball quickly forward. This allows him to win plenty of outside ball, running at just over 30 per cent contested. In saying that, Wareham has not spent much time on the inside, with players at both the Rebels and Country more suited to those roles, so instead the 187cm utility is able to play to his strengths on the outside.

With just one third of his possessions won at the coalface, Wareham could easily improve his contested game, and given he sits at 80kg, he is far from the lightest prospect, so more readymade for the role than some other lighter bodies. He is still able to fill out further, but he could use his decision making on the inside to pick the right exit out of a stoppage for his teammates. With a disposal average just into the double-figures, Wareham could lift his accumulation with just 11.1 disposals per game in season 2019 from seven games before injury ended his year early. Having recorded 21.4 on the yo-yo test in the pre-season, Wareham has a good endurance base from which to build and work his way into the midfield. This, along with his scoreboard impact – he only booted two goals last year from nine games and three goals this year – are other ways he can further develop his game. Across the board Wareham is okay athletically without being outstanding, but it is his skill and decision making that always stand out on the football field. A December-born prospect, he is one of those players that is almost a bottom-ager so therefore arguably has an extra year of development in him compared to many others in his age group too.