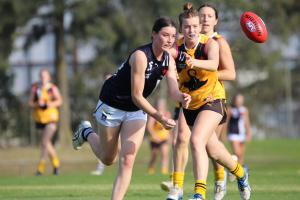 Ingrid Houtsma is a versatile tall who can seemingly play anywhere on the field as she showed during her time with the Geelong Falcons in the NAB League Girls competition. Stationed at half-forward, half-back and the wing, Houtsma has plenty of upside for the future.

Having played a bit of everywhere during 2021, Ingrid Houtsma might not be a massive ball-winner, but when she does win it, she generally makes the right decisions with ball-in-hand. Her greatest assets are her athleticism and endurance for a taller player, able to roam around the ground and get into potential ball-winning positions. She attacks the contest hard when going for a mark and has plenty of eye-catching moments that suggest the utility has plenty in the bank to improve for the future.

When playing in a key position role, Houtsma is able to lead out strongly and back herself with a fierce attack on the ball and win it in the air, or bring it to ground to advantage. Because of her athleticism, even if she drops the mark, she is able to recover quickly and create some separation on her opponent. When playing on a wing, Houtsma is able to roam up and down the ground and find space to keep the ball moving in transition.

Whilst there are more opportunities for Houtsma to follow up possessions and win more touches around the ground, she has the right base to build her game around. Her upside is clear, and with her athleticism and ball use impressive, it is just about complementing what she already has shown. Still raw compared to some players, Houtsma is one who could improve rapidly with further development.

“A player with plenty of upside, Houtsma becomes the remarkable fifth Falcon in the top 18 players showing just how deep the Falcons’ side was this season. She does not need to win a lot of the ball to have an impact, her Houtsma’s athleticism across the ground as a 176cm enabling her to play on a wing, or in a key position player at either end. Strong overhead, and able to win it at ground level, Houtsma attacks the ball at speed on a lead, and generally uses it well when in possession. Still ironing out consistency within games, the versatile utility has already spent time at centre half-back, centre half-forward and on the wing, which is a huge feather in the cap for the teenager.” – Peter Williams via “Draft Central AFLW Draft Power Rankings – Victorian Pool: June 2021”

“Consistently filling a role on the wing, Houtsma was at times overshadowed by her higher accumulating teammates but still played a valuable part in the Falcons’ season. Houtsma’s sense of the outside role was vital for Geelong; holding her space to be a release option, she’d often go for runs and then deliver the ball well by foot to teammates coming towards her. On the rare occasion she found herself in trouble through the year, she showed she was able to work through traffic cleanly. She ended up as yet another Vic Country Under 19s representative, where she brought the usual reliability she offers.” – Declan Reeve via “2021 NAB League Girls team review: Geelong Falcons”