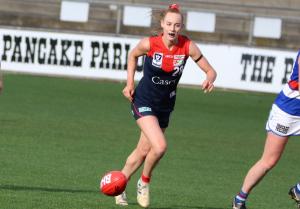 Imogen Milford is a 21-year-old tall forward who has the athleticism to roam up to the wing, providing her team with a unique player. She has been a big improver this season, finishing second overall in the VFL Women’s leading goalkicker award, and has attracted interest from AFLW clubs, indicated by her AFLW Draft Combine invite.

Imogen Milford has slotted 19 goals in 15 games, averaging nine touches per game and laying more than four tackles. For a taller talent, Milford is good at ground level, and has the work rate and athleticism to work hard up the ground. Two years ago, Milford managed the three games for Richmond VFLW, but has found her home at Casey this season with 1.3 goals per game. She was predominantly inside 50 for the most part early in the season, and has expanded her game further afield as the year went on.

Whilst she can hit the scoreboard in big doses, her consistency from game-to-game could improve. She kicked multiple goals in five games, with a six-goal haul against Hawthorn the highlight, and all of Casey’s three goals against Collingwood. Her marking, in particular her contested marking could improve, but when she brings the ball to ground she can still have an impact, and her work at ground level is strong.