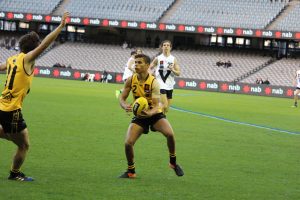 The creative half-forward comes from strong football bloodlines as he is the second cousin of Fremantle pair Stephen and Brad Hill. The Perth youngster has all the attributes which wins the hearts and minds of AFL coaches, players and fans alike. Blessed with speed to burn and terrific foot skills, it is an exciting sight when the man affectionally known as Bobby (due to his fondness of Bob the Builder as a youngster) swoops on the ball and set up his teammates for goal scoring opportunities.

Hill does not have to have a high number of possessions to have an impact on the game. His skills greatly suits the forward 50 area where he can cause havoc with his pressuring skills and he certainly knows where the big sticks are. However, he is just as much at home dashing off the half back line and setting up attacking thrusts which he has done for the Demons a few times this season. Once the 18 year-old builds up his light frame, a key role in the midfield beckons. For his tender age, Hill has a fair bit of big game experience having been part of two WA U/18 campaigns as well as playing a couple of reserves games for the Demons as well.

There is a reason why league coaches do not always look to negate the player who accumulates the most possessions. It is a proven fact that the player with the ability to run and create is what gives them sleepless nights. The ability of Hill to scoop the ball up in heavy traffic and set off leaving opponents flat footed is a skill in its own right.

There is one thing to have speed and then there is another thing to use it in the right fashion. Hill does that with his ability to use his evasive skills to deceive his opponent and get himself out of tight situations. He also has the ability to use his closing pace on opponents to win back the ball from the opposition. His results in the agility testing at the upcoming AFL combine will be fascinating to see.

Elite foot skills is another key asset in today’s football as seen with Hawthorn three-peat success and in more recent times with the West Coast Eagles this season. Hill has a innate ability to find a teammate with a pin-point pass who is in a goal scoring.

With all the exciting attributes of Hill, you would be thinking he would be a talent scouts’ dream, but the one thing that holds him back from being a true top 10 candidate is his size. Hill tips the scales in the mid 60s which means he faces a pre-season or two of heavy gym work if he wants to be a first-choice midfielder. It was noticeable that he struggled somewhat with the bigger bodies when he made the step-up to the reserves late in the season. However it poses as a delicate balance as getting too bulky will certainly negate some of his natural attributes.

His WAFL campaign was a stop-start campaign due to a number of factors.  U/18 championships, a two-game suspension he received for a sling tackle (against Vic Country) which carried over to Perth’s season along with dealing with some niggling injuries and a delayed concussion. These interruptions led him to play just nine games this season. Once again, getting his body into prime senior footy conditioning poses as Hill’s biggest task.

Hill is a ball of excitement ready to leap onto the AFL scene. We see every season how indigenous talents can instantly improve the fortune of a team with their natural ability and Hill certainly fits that description. While the West Australian youngster is still a work in progress, Hill shapes as an ideal choice for a team that is looking to inject some speed, creativity and skill into their side. Expect him to land somewhere in the top 20 picks, with both West Australian sides surely eyeing off the leader, while other teams looking for some X-factor will consider the excitement machine.