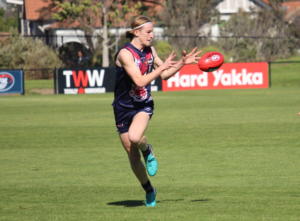 DRAFT ANALYSIS: “A talented forward who oozes X-factor, Ralphsmith causes headaches in the air and at ground level with his fantastic leap and line breaking speed.”

EASILY confused with fellow Dragons teammate Miles Bergman as they player in similar positions and both catch the eye with their athleticism, size and blonde locks. If one is quiet, the other is usually causing havoc for opposition defenders. Ralphsmith showed how dangerous he could be in a final against the Calder Cannons kicking three first quarter goals proving too strong in the air and too quick and slick at ground level. He would finish the game with 19 disposals, eight marks and kicking 3.3 in his best performance for the year. Ralphsmith oozes talent and despite underperforming for Vic Metro he was still able to pull of one of the plays of the championships kicking a long range banana and make it look effortless and it’s almost a case of what cant he do as a forward as he ticks a lot of boxes and is the type of player you could see flourishing in a team like Richmond that like to move the ball on at all cost.

If the draft was done on a highlights package Ralphsmith would go very early as he displays traits similar to 2018 rising star winner Jaidyn Stephenson as a medium forward at 188cm he can do it all taking overhead marks with his impressive leap and swooping on the crumbs with his speed and clean hands. Ralphsmith is not afraid to fly for high marks and with his timing can even outmark taller players and if he doesn’t take the mark he is quick to recover and quickly gather and look to snap at goal, he can also play on a wing where he likes to run and carry and he is very hard to stop once he gets on his bike and he can glide across the ground effortlessly. Ralphsmith was a strong performer at the combine testing well for speed and leap but it was his 2km time that really impressed and showed his ability to push hard which will be required at the next level whether as a dashing wingman or hybrid forward, to go with the speed and work rate he also has clean hands and rarely fumbles even under pressure which is a great trait to have as a forward especially where there is a lot of pressure to be clean and make the most of your opportunities. If he puts everything together Ralphsmith can be a match winner at AFL level.

Ralphsmith certainly looks good with ball in hand and he gets most of his possession up the ground was a wingman playing an outside role and although his contested numbers are solid for his position it is always something that could improve as he has great hands and speed which could be utilised at stoppages more if he can refine his ability to win the contested ball but he is just so damaging on the outside that its really not a major issue at this stage. Most modern forwards incorporate pressure acts into their game which is an area Ralphsmith could also improve especially with his speed and work rate being so good he could really stroke the perfect balance of attacking flair and defensive acts. When Ralphsmith is up and running he can hard to stop and is usually strong for one quarter, but could have little influence for others and that goes for entire games with half of his games in the NAB League going goalless which is usually fine if the forward has offered a lot of defensive pressure which has not been the case for Ralphsmith and although he has spent a lot of the time on the wing as well his disposal numbers in those goalless games would have to be better as he has only gone over 20 disposals once this year.