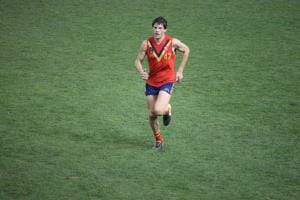 Hugo Munn is a big bodied key position forward, who at times pinch hits in the ruck, Munn has been a member of the AIS Academy Squad for the past two years and has been a consistent member of the Sturt SANFL League side in 2018. Munn was a member of this year’s 2018 South Australian National Championship winning team and played as a forward in most games.

Munn has a strong ability to mark above his head and showed through his body strength and size during the National Championships that he can turn a game with limited opportunity. He managed to kick key goals from marks in quick succession in a number of games, and also on the lead is difficult to match based on his size and reach. Munn’s biggest weapon during the championships was his contested marking and he is an excellent kick for goal. He is athletic to fly for the ball and based on his height, hard to defend.

At Sturt in 2018, Munn managed seven games at League level and one at Reserves level and finished the season with eight goals, averaging one goal per game. As a key forward at his age at SANFL League level he was often against experienced defenders, but certainly showed he is capable. In one game in particular he was critical to Sturt securing victory with a big contested mark and goal. Munn was selected in Sturt’s Round 1 league side on the back of an excellent pre-season and also after spending time training with the Adelaide Crows to get exposure at the next level.

At times Munn was played across defence, and against bigger bodies but he certainly showed some versatility and confidence in flying for marks and hitting the packs at pace and hard. In his last game of the year for Sturt, he finished with seven marks and 12 possessions.

Munn’s key strength is that he has shown at League level his body size and marking ability is at the standard required. On smaller opponents during the Championship he showed he was difficult to defend or move from his line, and contested marking his strongest attribute. When around goal Munn’s technique is sound and consistent and would be a reliable and efficient kick for goal. He offers that strong key position forward role for a club looking for a contested marking beast.

The size Munn brings to any side matched with his athleticism in the air and recovery has him able to get up the ground as a centre-half forward and provide a valuable target for moving the ball from the midfield. Big forwards who have a great set of hands at a young age are hard to find, and Munn is one of those.

Munn had pinch hit in the ruck at National level at times, but had not quite clicked for him in that role. At 197cm he could be the second ruck option, but improvement in that area would help him. For the times he played some minutes in defence for Sturt he was solid, but not quite as dangerous as how he looked as a key forward.

Munn is clearly a player that will always give effort, contest (often mark) and do what was required, we are just waiting to see that absolute break out game that takes his game to the next level, as he is capable of ripping a game apart, especially up forward. Key forwards take time to develop, but Munn has the attributes that will provide him the foundation to progress. He is quick on the lead, but with some development when the ball is on the ground will help take his speed to another level.

Hugo Munn is a contested marking forward who has abilities to reward effort from his midfield and hit the scoreboard and create moments for his team. His size and ability will make him a key target for clubs and with some versatility to his game could turn into a valuable asset to any team. He does have some areas such as speed and versatility to work on, but he could be that power forward target inside 50 for clubs looking for a goal scoring option.