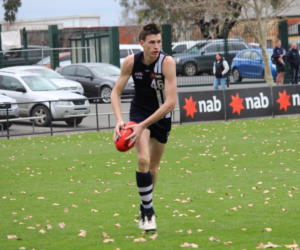 Henry Walsh is one of the more talked about prospects this year and not just because he is the standout Vic Country ruck talent. His brother Sam has already made his mark on the big stage with a Rising Star, Best Young Player and Mark of the Year award in two seasons, and is cemented in Carlton’s midfield. Henry is a little different, with a casual 19cm and half a dozen more kilograms over his older brother, and whilst he also plays on-ball, he is the one tapping it down to the midfielders. He was able to represent Vic Country last year in one match, and was expected to lead the charge in 2020.

Walsh is a really aggressive ruck option who attacks the contest and follows up with good ground level pressure. He is still developing a number of areas of his game, most notably his speed and endurance, but he has a good base of footballing traits to build on for the future. He has an impressive leap which, thanks to his height, allowed him to average 27.3 hitouts per game at NAB League level, surpassing 40 hitouts in a game three times. He was generally one of the more high-volume rucks going around in the competition, and given he was still a beanpole of sorts, it was great to see him competing against bigger-bodied, albeit often shorter rucks. The goal for Walsh this year was to really cement himself in that Vic Country side and have more of an influence around the ground beyond his ruck stoppage dominance.

If we focus on his ruck work, he was generally clean with his taps and able to put it to the right positions, and certainly get first hands to it more often than not. He had 16 hitouts in his his sole Under-18 Championships match for Country where he dual-rucked with Gippsland Power’s Josh Smith up against the Allies’ duo of Matthew Conroy (drafted last year) and Sampson Ryan (Draft Combine invitation this year). What Walsh does well aside from obviously winning the hitouts is his follow-up work, with the big man averaging three tackles per game. He also averaged the 2.8 clearances in the NAB League last season, not afraid to rove his own ball or get it off the deck and clear it to space. With those kind of traits, Walsh is able to really control the inside of the contest and be a huge factor in his side getting first possession from a stoppage.

In terms of where he needs to improve, certainly his speed and endurance are good places to start. He does not need to be lightning quick as a ruck, but improving it a touch would help him out particularly when resting forward, whilst his endurance – 8:06 over 2km at the Draft Combine – will need to lift to run out a full game at the elite level. The best rucks at the elite level have elite endurance which is something Walsh can add to his game. It would enable him to have a greater impact around the ground, where he averaged less than a mark per game, and as a lightly-built ruck it is another area he can improve to be more of a dominant force. Basically, inside the contest, Walsh was clearly dominant against his direct opponent, whereas outside the contest, quicker or stronger rucks with bigger tanks could take advantage of him. Overall though, he still looms as one of the top ruck selections in this year’s draft and is naturally viewed as a long-term pick.

Walsh is in that second to third round bracket for a couple of reasons. Firstly, his aggressive nature and work inside the contest are things which draw the eye and will prove intangible traits that not every player can develop. The traits he needs to work on can be developed, which is why he might end up being the second or third selected ruck in this draft. Secondly, the fact that there are so few quality rucks, a higher premium will be placed on them, and Walsh is one who is anticipated to be able to come in and work to compete at the top level.