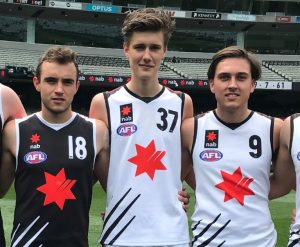 Woodville-West Torrens tall, Henry Smith is one of the many key position prospects staking his claim as an AFL Draft chance in 2020, and has returned a promising top-age season. Stationed primarily up forward, the 18-year-old also rotates through the ruck and can chime in at the forward 50 stoppages. After missing the first three SANFL Under 18s rounds, Smith entered Eagles side with aplomb and went on to string together 13 games at the level. Keen watchers may also remember his contributions in the SANFL Futures and Under-17 All-Star showcases last year, where he showed glimpses of his best form. Smith has been able to showcase exactly that more often as a top-ager, thriving on the back of a consistent run out on the park.

At over 200cm, it is no real surprise that Smith’s strengths read as they do. While stationed up forward as he most often is, the young tall is so difficult to stop from the front position. No defender in the SANFL Under 18s was able to get near him aerially when trailing behind, as the bigman would take the ball at its highest point with his long reach. While smart to use height to his advantage, Smith’s lack of explosive strength or spring may see him take less contested marks at the elite level, or be forced to find different ways of doing so. Still, almost half of his average 4.6 marks this season were contested, which is nothing to scoff at.

Smith’s height also comes into play while fulfilling his rotational ruck duties. Again, rather than possessing the monster leap or strength of other key position players, Smith found his way to many of his average 7.5 hitouts through simply being the taller man. That is not necessarily a knock on his craft, you have to use what edge you have to full advantage. His directional work was generally sound, with ruckwork an aspect of the game he seems to be refining. He had good support in the Eagles side this year too, allowing him to play forward much more often.

One of the most promising aspects of Smith’s game, and one which helps boost the upside tag is his ability to follow up at ground level. Should Smith be unable to initially clunk a mark, he can be seen immediately hunting the ground ball and looking to advance the play forward. For a player of his size, he works hard. It is something which may entice a club to take a chance on him, given his scope to develop into a ruck who can do similar things on the ball. He has proven he can also take marks up the ground, and not just inside 50, which further aids that potential developmental direction.

The Eagles product remains quite raw though, with some filling-out to do and skills to sharpen. Smith booted 16.14 during his top-age campaign, a steady return of over a goal per game. He went scoreless just once through 13 appearances, but had some finishing issues early in the year. It was pleasing to see him somewhat rectify that aspect of the game later on, eventually pushing to a positive record of conversion. He achieved the feat of two goals in a game on five occasions, unable to bag game-breaking hauls, but still contributing solidly.

While a jostle for top-end talls looms early in the draft, clubs in the position to develop a tall prospect could find great value in picking Smith with a late selection. As is the case with many players of his size and age, he is not yet the finished product, but could really be anything with his set of attributes. The ability to dominate aerially and find the goals are traits crucial to a modern day tall’s success, and Smith could be one to tick all said boxes if given the opportunity and time to develop.