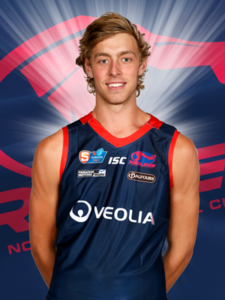 THE mature-aged ruck from Norwood is a player who has the physicality – but not quite the athleticism and endurance – to come straight into an AFL system, with his contested marking ability, strength and work around the ground among his best traits. He manages to find plenty of the ball despite not having a high endurance base, following up well for his size to average 4.9 clearances and 3.6 tackles among 15.9 disposals this season. It is no surprise though that a player of his size lacks athleticism across the board, with his effort making up for that gap. The 22-year-old continued his development in the SANFL Reserves this year across 19 games, taking out the Redlegs’ best and fairest at said level for his consistent season. His 18 disposals, seven clearances, six tackles and 47 hitouts against South Adelaide was the peak, and an insight into his potential to dominate. Overall, a mature-age ruck option for clubs with a few years under his belt and the confidence to impact games beyond the ruck battle.