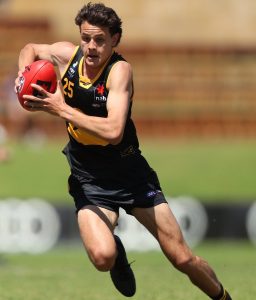 DRAFT ANALYSIS: “Chapman is an attacking defender who reads the play well to intercept, then looks to move on quickly and deliver via foot.” – Michael Alvaro

Among a talent pool rich in key position stocks, Heath Chapman stands out as a defensive option with many points of difference. Not only does he thwart opposition attacks with sound intercept marking, but the West Perth product also incites attacking chains with his penetrative kicking. The 18-year-old backed up his strong bottom-age campaign with a stellar 2020 Colts season, let loose as a floating figure in the defensive half having already cut his teeth as a traditional key defender. Chapman also broke through for his WAFL League debut late in the year, adjusting to the level well before returning to his age group for finals. He has been a mainstay in the West Australian and AFL talent pathways; earning selection in last year’s Under 17 All-Stars showcase, this year’s AFL Academy intake, and the recent WA All-Star fixtures, while also strutting his stuff at the National Combine. With athleticism and a well-balanced game, Chapman is bound for first round honours.

There are many strings to the bow of Chapman, a defender who can also hurt the opposition going the other way. Chapman’s first point of call often comes aerially, as he floats across with terrific courage and timing to clunk intercept marks on the defensive arc. From there, he instinctively plays on and turns defence into attack, punching penetrative and accurate kicks forward to open up the ground for his side. This style of play has come largely thanks to a slight change in role throughout 2020, as Chapman has been let off the chain to roam as a third tall, rather than manning the best opposition key forward.

Chapman’s elite running capacity is highlighted by eye-catching testing results; notching a score of 21.6 on his preseason yo-yo test, while also taking out the West Australian combine’s 2km time trial with a time of 6:30. More significantly, his endurance is showcased on-field with important repeat running. When he opts to hit a short-range target rather than going long, Chapman is often sighted running hard to chain his next possession, becoming the receiver and advancing to an even more dangerous position to utilise his proficient kicking.

His composure with ball in hand is also noticeable, with sound decision making allowing Chapman to make the most of each disposal. That factor, and the aforementioned traits combine to give the West Australian a brilliant balance between his defensive and offensive output. At 193cm, he plays somewhat like a small with such athleticism and disposal efficiency, but still has the height and smarts to impact aerially.

He is the type who does a lot of things well for a player of his size, though his current figure may raise some queries as he transitions to the next level. Chapman is perhaps a few centimetres and kilos off true key position stature, making his key defender tag a touch less viable in the AFL. It is hardly a major issue, as Chapman looks like easily developing into a defensive utility who can play loose, lock down opposition forwards, or run off his man to intercept.

The West Perth product is obviously quite highly rated among his peers and opposition coaches too, as he took out this year’s WAFL Colts Coaches Award ahead of Jack Clarke and Mel Whinnen medalist, Lachlan Vanirsen. His character and vast array of elite traits see many ticks placed next to his name, with plenty of natural talent there to nurture.

Chapman has firmly cemented his spot within first round calculations after an outstanding season, and could be one of a few West Australians taken within that range. His array of weapons and flexibility as a key defensive option could see him considered with a pick in the early teens, while it is hard to see him sliding much further than the top 15. The first round tag is a safe projection, with Chapman’s upside pointing towards great value at that 11-15 range.