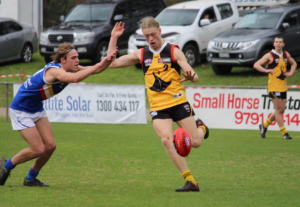 DRAFT ANALYSIS: “Arguably the best kick in this year’s draft pool, Young is a damaging half-back with great intercept marking and scope to move into the midfield.”

TOUTED for his game-breaking kicking ability and impressive athletic base, Hayden Young is one of the leading prospects to be taken after the seemingly inevitable top two selections. A mainstay in Dandenong Stingrays’ premiership-winning back six last year, much of the promise surrounding Young came from a potential move into the midfield, but that remains an area of hope after he continued his form largely across half-back once again. His athletic traits were again shown off at the National Combine, topping the agility test with a time of 7.940 seconds as the only player to crack under eight seconds to go with his solid speed and endurance scores. Young averaged an impressive 22.3 disposals (15 kicks) in the NAB League this year and 22 (16 kicks) in the National Championships to highlight his consistency, transitioning from his usual half-back role to be tried in the midfield and on a wing late in the Stingrays’ campaign. A modern defender, Young would provide great value late in the top 10, but will unlikely last past pick five given the prolific level of his skills.

Young’s style of play combines damage going forward with safe defensive attributes. They lend to each other, with his intercept marking and reading of the play allowing him to then set up from the back with his run and laser-like kick – around 70 per cent of his overall disposals this year were kicks. The things that point to Young’s upside and midfield potential are mostly athletic, with his 21.3 pre-season yo-yo score a good base, and his 7.940 second agility test at the National Combine second to none. With a 20m sprint time close to the three-second mark to boot, do not be surprised to see Young’s explosiveness from packs and work rate around the defensive arc translate to dominance through the engine room. His decision making is also to be admired, with Young’s ability to find targets at that difficult 45-degree angle and hit them up under pressure like it is kick-to-kick in the park. He can kick long across his body and find a free target, and almost always makes the right decisions, even if the execution ends up that tad too risky and it does not pay off. Young does not die wondering with his penetrating plays that open the game up for his team.

But Young’s midfield craft is still a work-in-progress and will come with time. He showed late in the NAB League season that he was more than capable there with three-straight 25-plus disposal games, managing to hit the scoreboard in both. All of his NAB League goals came in those outings too and given Young’s ability to impact the game in the attacking half (average 3.0 inside 50s), he could certainly have put a few more through the big sticks – particularly in hand-off situations from range. Young’s clearance average of 2.5 was also boosted in those late appearances, coming shortly after a national carnival where he had just 28.7 per cent contested possessions. His ability to do both is improving, but is not quite at the level of others just yet. Still, Young is as well-rounded in his game and athletic traits as any top prospect, and we tend to be more critical of the best players given the greater difficulty to pinpoint clear deficiencies.